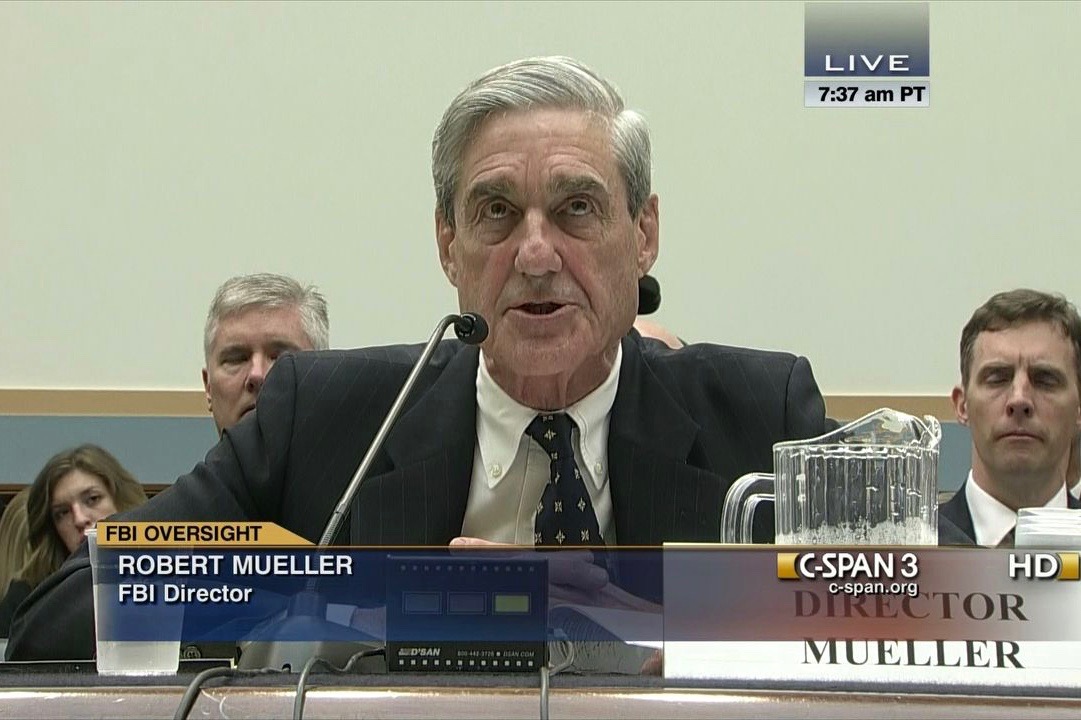 1. Director Mueller. About two hours before your Report was released, Attorney General Barr held a press conference where he claimed that the Report had arrived at several conclusions. For example, that the Trump Administration had fully cooperated with the investigation. Did the Report conclude that President Trump had fully cooperated with the investigation?

2. I’d like to go to what you wrote in the Report. And I’m assuming that the Attorney General read the same Report I did. Would you consider the President firing FBI Director Comey, the head of the investigation, to be cooperating with the investigation? And if not, why not?

5. Would you call it obstruction of justice?

6. In the Report, the President repeatedly threatens to fire Attorney General Sessions if he doesn’t unrecuse himself and fire you. The President did this so often that when the Attorney General was called to the White House, he felt it necessary to have his letter of resignation in his suit jacket pocket. Do you consider that cooperating with the investigation? And why not?

7. How about… oh, refusing to be questioned in person by prosecutors? Do you consider that fully cooperating? And why not?

9. Did it surprise you that a man of Attorney General Barr’s vast experience and widely-regarded acumen would characterize the President’s words and actions as constituting full cooperation?

10. Uh huh. And how would you explain that? Would I be correct in saying that it wasn’t about any diminished capacity on his part?

11. Would it be a more likely explanation that he understood that very few Americans would read the 440-page Report, and that he could influence the public’s understanding of the Report by deliberately mischaracterizing it before the media had a chance to characterize it?

12. In that same press conference, Attorney General Barr said that the Report had concluded that there had been “no collusion” between the Trump campaign and the Russians. The President likes to repeat that every chance he can. But you did not conclude that there was no collusion, did you?

13. In fact, on page two of the Report you say, “…Collusion is not a specific offense or theory of liability found in the United States Code, nor is it a term of art in federal criminal law. For those reasons, the Office’s focus in analyzing questions of joint criminal liability was on conspiracy as defined in federal law.” So, would it be fair to say that you made no judgement at all in the Report about whether there was collusion?

14. So, if a graduate of an accredited law school asserted that the Report had concluded that there was no collusion between the Trump campaign and Russia, would that be person be wrong?

15. And just so the average non-lawyer understands, that means that no one could ever be charged with collusion in federal court because collusion is not a criminal offense in the U.S. code. We all understand what collusion is, but it’s just not something you could ever indict someone for. Just as you would never indict someone for, say, “being in cahoots.” We all understand what the colloquial “to be in cahoots” means. For example, in the Roger Stone indictment, which was redacted in the Report, it says that Mr. Stone and the Trump campaign were in cahoots with WikiLeaks. But I think you would agree, Director Mueller, that we are never going to hear this in a federal courtroom: “Your honor, the jury finds the defendant, Roger Stone, guilty of being in cahoots.” Am I correct?

16. And what is the statute of limitations on being in cahoots? I think everyone gets my point. The reason that’s a joke is that it’s so ridiculous. But saying the Report concluded that there was no collusion – isn’t that just as ridiculous?

17. Staying on that point. Would it be fair to say that by sharing internal polling data on Pennsylvania, Michigan, and Wisconsin with Konstantin Kilimnik, who the FBI considered to be connected to Russian intelligence, that former Trump campaign manager Paul Manafort and Kiliminik appear to have been in cahoots?

19. Attorney General Barr testified here in the House and in the Senate that he had no idea what you had thought of his summary of your Report. But this was after the phone call with him when you two discussed how you felt about the Attorney General’s summary. Was he telling the truth?

Thank you for your service to our country.