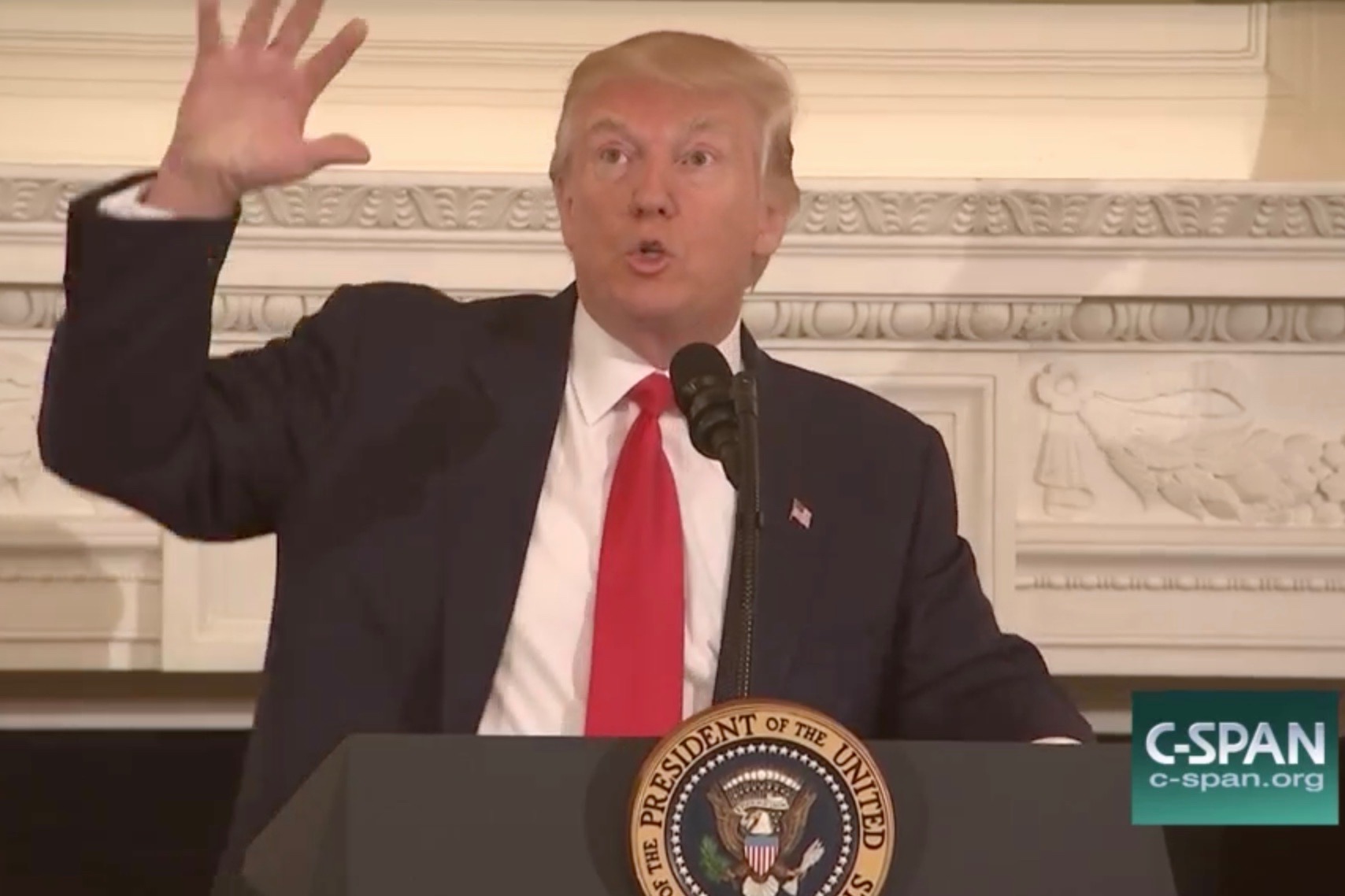 Democrats won back the House majority in the 2018 midterms, picking up 40 seats and beating Republicans by a total of 8.6 million votes nationwide, our largest margin since the 1974 post-Watergate midterms. Why? Health care. By a nearly two-to-one margin, voters leaving the polls said that health care was their most important issue. And voters in three states voted for Medicaid expansion – Idaho, Nebraska, and Utah!

Back in 2014, only 36 percent of Americans had a favorable opinion of Obamacare. In 2018, a sizeable plurality supported it.

What happened in between? 2016. That’s when the Republicans accidently won control of the entire federal government. After seven years of promising to repeal and replace Obamacare, Republicans would have to show what they’d come up with.

When Republicans finally revealed their plan to replace the ACA, it was spectacularly awful. Somehow, they had used the seven years to craft a plan that managed to take insurance away from 23 million Americans while making it far more expensive for tens of millions of Americans. Protections for people with pre-existing conditions? Up to the states. Older Americans not yet aged into Medicare would see their premiums skyrocket. And that Medicaid expansion now so popular in 36 states? Effectively gone. The essential health benefits guaranteed by the ACA? Still guaranteed? Not so much.

Ultimately, the repeal effort failed by just one vote in the Senate. But thanks to Republicans in Congress, Americans finally realized what was in Obamacare. And they discovered that they not only liked it, but desperately needed the protections it provided. And that is why Democrats picked up 40 seats in the House.

So, naturally, President Trump has decided to double down. Merely hours after his hand-picked Attorney General managed to execute a reasonably successful cover-up of the Mueller Report, Trump changed the subject by instructing his Department of Justice to stop defending the Affordable Care Act against a ridiculous Republican lawsuit in federal court.

In other words: Having just lost big in an election where the most important issue was health care, Donald Trump is now going out of his way to pick a fight on. . . health care.

It isn’t going to go any better for him this time. And a big part of the reason why is that Donald Trump knows nothing about health care.

I don’t just mean that he’s reading the politics wrong. I mean that he fundamentally does not understand how health care works. Which gives me an excuse to bring up something that has bugged the hell out of me for a couple years now.

Go back to 2015, when Trump announced his candidacy. It was immediately clear that he was not a big details guy, except in the whole general area of xenophobia. But as a member of the Senate Health Committee, I was particularly interested in what he had in mind when later in the campaign he promised to replace Obamacare with “something terrific.” “Something terrific?” That sounded terrific. But what did he actually mean?

It turned out that he had no clue. Health care may well have been the issue that Trump knew the least about, if, in fact, trace elements of knowledge can be detected and measured. Trump had exactly one idea, and one idea only, about health care. You don’t remember it, do you?

When I remind you, the idea may ring a bell, because he repeated it throughout the campaign whenever pressed to detail his plan to replace Obamacare. Trump’s one idea? Allowing health insurance companies to sell policies across state lines. That was his sole policy prescription for replacing the ACA with something terrific. Trump told us that allowing health insurance companies to sell insurance policies across state lines would create so much more competition in the insurance market and drive down the cost of insurance dramatically.

No one ever called him on it – not one of his fourteen (fifteen?) Republican opponents, not one of the moderators, not even Hillary. Here’s the thing. The idea of allowing insurance companies to sell health insurance policies would actually be incredibly destructive. If it weren’t entirely meaningless. Huh?

Let me explain. The reason most states have never allowed out-of-state insurance companies to sell policies in their state is that it would create a race to the bottom. Before the ACA created a set of national standards for what health insurance policies are required to cover, fly-by-night insurance companies could offer dirt-cheap policies that essentially covered nothing.

Read The Rainmaker by John Grisham, or enjoy the movie starring Matt Damon. A young, idealistic lawyer (Damon) takes on a client (Mary Kay Place) to sue a disreputable health insurance company owned by a wealthy sleaze ball (Roy Scheider) because it denied life-saving care for her son with cancer. Damon wins a huge judgement, but the company files for bankruptcy and mom gets nothing. Oh. Spoiler alert!!! Too late? Sorry.

Once the ACA became law, every plan had to cover ten essential health benefits, and had to file financial reports to demonstrate its solvency. So, why doesn’t the Affordable Care Act allow states to let insurance companies sell policies across state lines?

Hint. It’s less than one.

Why? Well, have you heard of the term “provider network?” Insurance companies have to provide you with a network of health care providers. Usually, people like to go to doctors and hospitals that are in their state! How does an insurance company go about finding a provider network for their policy holders? They travel around the state!

Gee, that must be time intensive. Well, it is. And it must take quite a bit of skilled manpower to put that network together. Yeah, it does. I mean, you’d probably want to set up an office or two or three within the state to accomplish all that.

Why didn’t anyone explain that to Trump during the debates? Why didn’t somebody say, “YOU DON’T KNOW WHAT YOU ARE TALKING ABOUT!!!! YOU ARE A COMPLETE IGNORAMOUS!!! YOU ARE A DANGEROUS, LAZY-ASS, INSANE PERSON WHO BELONGS NOWHERE NEAR THE WHITE HOUSE!!!!”

I’m sorry. I’m upset that this guy is our president.

There are many Democrats, and you can count me among them, who sometimes think that there is a method to Trump’s madness. That we underestimate the man at our peril.

Some think that Trump wants to fight on the health care battlefield because of all the energy in the Democratic party behind single payer. He wants to be able to call us socialists. I’m sure that’s true.

But we win on this battlefield. That’s because our arguments about single payer underscore a number of things that Americans like. First and foremost, every Democrat wants to get to universal care. Single payer is one way, and, maybe, the best way to achieve that end. But there are those who understand that even if we win the White House and somehow get the majority in the Senate, it will be impossible to get to 60 in the Senate.

That’s where Democrats have actual ideas to get from here to there. There’s a reason Idaho voted for Medicaid expansion. So, how about a public option? As a transition. And if those who choose to buy into Medicaid or Medicare really like it, then their friends and families and coworkers will buy in too. Before too long only the Koch Brothers, Alex Jones, and the DeVos Family will be covered by private insurance.

Every Democrat’s goal is universal care. Every other developed country has it and delivers care that has as good or better outcomes than we do for about half the cost. And they pay about 30% of what Americans pay for their pharmaceuticals because they use their collective power to negotiate with the drug companies. Democrats want to do that. Republicans don’t.

We win this one.

So, please, ignore all the concern trolls who want us to stop arguing about single payer. We’re not in disarray. We’re trying to tackle a very complicated problem! And unlike Donald Trump, we have more than one (extremely dumb) idea for how to do it.