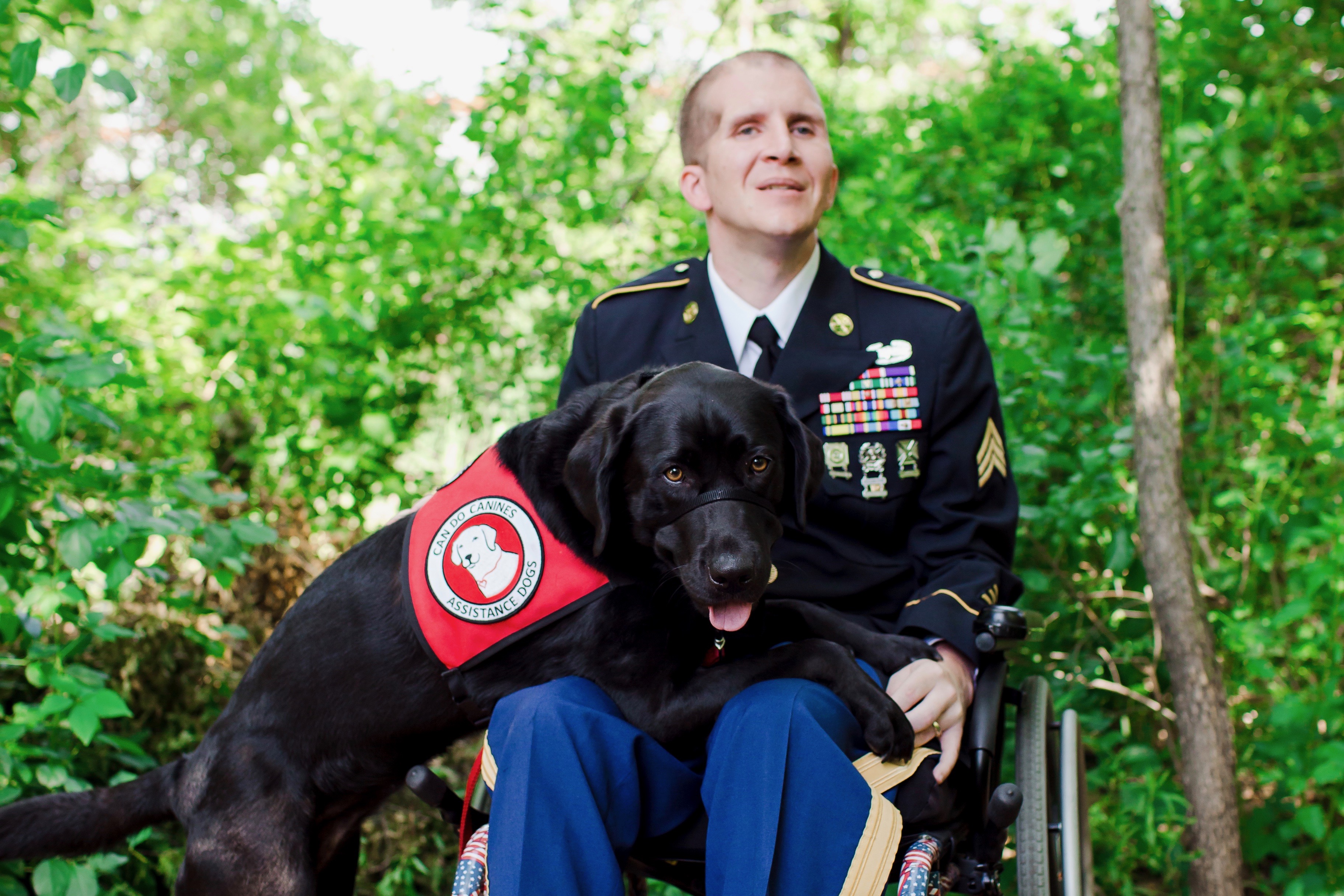 We lose twenty veterans to suicide every day. These are the soldiers, Marines, sailors, and Coast Guard and Air Force personnel who have put everything on the line for those of us with badly-timed bone spurs.

This Sunday’s New York Times features a story about a three-year study on the benefits of pairing service dogs with veterans suffering from severe PTSD. The study was authorized by my first piece of legislation in the U.S. Senate. The idea was pretty simple: Match 200 Iraq and Afghanistan veterans suffering from PTSD each with a well-trained service dog and do a scientifically-based study to determine whether and how the veterans had benefited after three years.

Because of various false starts detailed in The Times, the three-year VA study has yet to be completed ten years after the bill passed. Thankfully, the results are expected next year. My hope and expectation are that they will show that matching veterans with PTSD with service dogs provides real relief from PTSD’s debilitating symptoms. That’s because I have met veterans who have had their lives significantly improved and, in some cases, saved by these highly-trained dogs.

I met retired Army Captain Luis Montalvan at an event for the Iraqi and Afghanistan Veterans of America the week of Barrack Obama’s first inaugural. I also met Tuesday, his beautiful golden retriever. Luis told me that he wouldn’t have been able to attend the event if it weren’t for Tuesday.

Luis had served as an intelligence officer in Iraq and was seriously wounded in Anbar Province. He returned home with two Bronze Stars, a Purple Heart, and severe PTSD, which manifested itself in panic attacks, nightmares, and acute agoraphobia (the fear of leaving your home), all of which he self-medicated with alcohol.

Then a nonprofit organization contacted Luis and offered to partner him with a service dog. Desperate, Luis went to a training facility in upstate New York, where he met Tuesday.

I asked Luis how Tuesday had changed his life.

“Well, Tuesday can anticipate my panic attacks by observing changes in my breathing or smelling my perspiration. So, he’ll nuzzle me and prevent me from having a panic attack.”

Hmmm. “If I’m having a nightmare and start thrashing around, Tuesday will jump on the bed and wake me up. And he broke my isolation. You know, you have to take a dog out a couple times a day. And I learned something. People don’t like going up to scruffy-looking wounded vets. But they do like coming up to a scruffy-looking vet who has a beautiful dog.”

At that time, I was into the third month of an eight-month recount-legal battle to be seated in the Senate. After meeting Luis, I made it my business to learn as much as I could about service dogs. I spoke with a couple who could now go to the mall with their autistic son, who loved taking care of his service dog, even as his service dog was taking care of him. I met veterans who had stopped taking medication for their depression because their service dog so improved their outlook on life.

By the time I got to the Senate, in July, 2009, I had my first bill ready to go. Because I was convinced that pairing a veteran with a service dog could make an enormous difference in the life of a veteran with PTSD, I wanted the VA to conduct a scientifically sound study measuring the effect of matching well-trained service dogs with veterans.

I did not get the seat on the Veteran Affairs Committee I had requested, but immediately got a co-sponsor on the committee, Republican Johnny Isakson of Georgia. The bill sailed through, and my three-year study was just eleven years from being concluded. (I hope.)

A week after we left for the August recess, senators gathered in Boston to honor Ted Kennedy, who had died after a long fight with brain cancer. Johnny approached me at the funeral. “Al,” he said, “I’ve been getting a great reaction back home for that dog bill of yours. If you ever have another bill you want cosponsored, you let me know.”

“Oh, I’ve got one, Johnny. It’s a bill for gay marriage and abortion on demand.”

Johnny nodded politely and said, “I’ll get back to you.”

I kept in touch with Luis. David Letterman is a friend and a dog-lover, and soon Luis and Tuesday were guests on his show. As I watched their appearance from home, I thought to myself, “Why is Luis so flat and affectless?” Oh, right. He has PTSD.

But Tuesday was making an enormous difference in his life. Luis enrolled in journalism school, graduated, and wrote a couple of popular books about his experience with Tuesday, including a children’s book, Tuesday Takes Me There, about how Tuesday helps him get around the city. It was one of my grandson’s favorite books. But now that he’s six, he’s moved onto books about Ninjago warriors with superpowers.

As Luis and I continued to work together on the issue, we became friends. But, Luis’ shattered leg was bothering him more and more, and about three years ago, he travelled to Australia for a procedure that involved amputation and some kind of prosthetic leg. He and Tuesday were separated all that time and when Luis returned, he was not well. Soon after, he took his life in a hotel room in Dallas. Tuesday was not with him.

The thing about trauma is that it’s based on memory, and the memory never goes away. Because it’s always there, you have to stay vigilant. And if you don’t, you can fall back into the throes of the trauma, which can throw you back into adownward spiral. I don’t know why Luis chose to go to Australia for the procedure or to separate himself from his best friend, Tuesday. Mostly, it makes me sad. And more determined to carry on the fight we shared.

Next year we will finally see the results of the eleven-year-three-year study. One of the early conclusions is that the accreditation system needs to be tightened because there are significant quality differences between service dog training programs.

There are some extraordinarily effective ones that I have been to. As you will see in the Times piece, it costs a lot to train a service dog. These veterans are men and women who have put everything on the line for us. If you would like to donate to two programs that I can vouch very highly for, please go to: