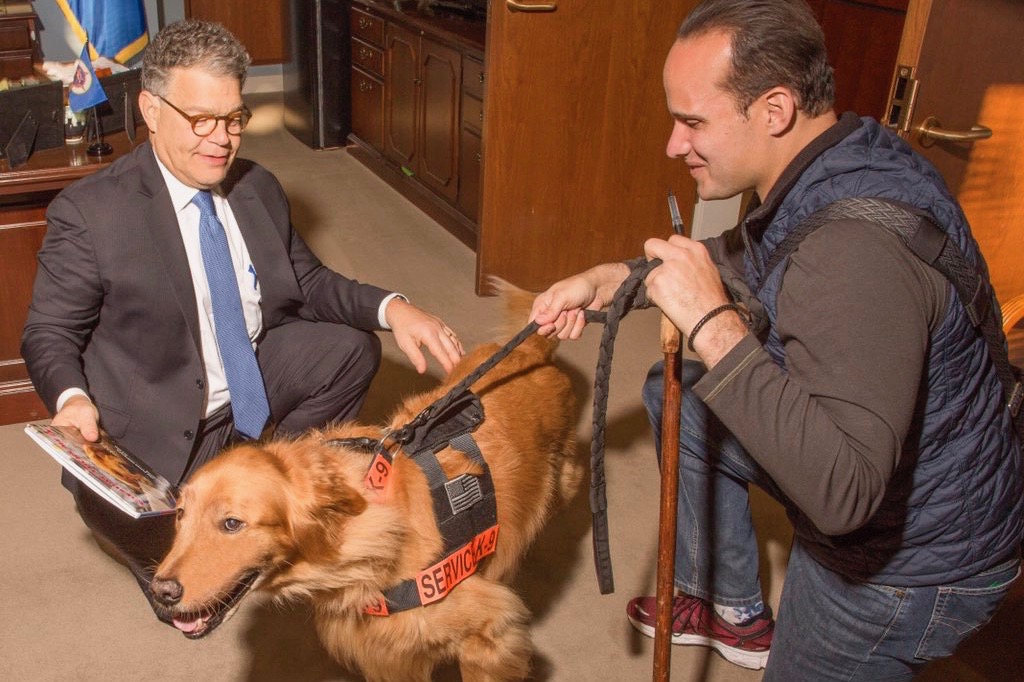 In January, 2009, I met retired Captain Luis Montalvan and his service dog Tuesday at an Iraq and Afghanistan Veterans of America event. Luis had served as an intelligence officer in Iraq, where he was seriously wounded and returned home with a severe case of PTSD. He told me he could not have attended the event were it not for Tuesday.

After Luis returned home from Iraq, he isolated in a small Brooklyn apartment, medicating his agoraphobia and panic attacks with alcohol. Out of sheer desperation, Luis took up an offer from Educated Canines Assisting with Disabilities, ECAD, a Connecticut organization which trains service dogs and matches them with vets like him.

I asked Luis what Tuesday did for him and was amazed at what he told me. Tuesday could anticipate Luis’s panic attacks by closely monitoring his breathing and perspiration. If Tuesday sensed one coming, he’d nuzzle Luis, both alerting and calming him, averting an incapacitating attack.

If Luis was thrashing in his bed from a debilitating nightmare, Tuesday would jump on the bed and wake him up.  He’d even make sure Luis took his medicine by grabbing his sleeve and pulling him over to the meds.

Luis and Tuesday were the inspiration for my first piece of legislation, cosponsored by Johnny Isakson of Georgia, who is retiring at the end of this year. The legislation funded a VA study that matched 200 service dogs with 200 veterans with PTSD.  It was supposed to be a three-year study to assess the cost-benefits of pairing a service dog with a veteran suffering from trauma. There were some screw-ups along the way – at first they used unaccredited service dogs in their first go-round in Tampa. One of those dogs bit a child. After some false starts, the VA has been training their own dogs and the study is supposed to be completed by next year.

I kept in touch with Luis and Tuesday, and as I got to know them and see them together, it became clear that two of the biggest benefits were the love that Tuesday gave his master and the love Luis gave back.  Luis wrote a few books about Tuesday – two are children’s books that are among the very favorites of my six-year-old grandson Joe. When I put Joe to bed, we usually read two or three books before we turn off the lights and I sing him some Grateful Dead, James Taylor, and Paul Simon till he falls asleep.

One of the books in Joe’s heavy rotation is Tuesday Tucks Me In, a book with lots of photos that shows how Tuesday helps Luis through the day, and also the tremendous care, grooming, and love that Luis gives Tuesday in return.

I read Tuesday Tucks Me In just two nights ago. I started to tear up, but didn’t let Joe see. You see, Luis committed suicide about three years ago. It’s a complicated story with some wrinkles that I haven’t completely made sense of. Luis’s leg got progressively worse over the years and he made the decision to have it amputated and replaced. For some reason he chose to have it done in Australia. Luis spent months away from Tuesday there, and when he came back, he went directly to a speaking gig in Dallas without Tuesday. Luis killed himself alone in a Dallas hotel room.

ECAD, the people who trained Tuesday, took him home to where he had been trained for two years. I learned last night that they found a massive growth in Tuesday’s stomach, and the vet discouraged them from doing a procedure that would not prolong his life.  He is there now surrounded by people who love him as he finishes out his final chapter.

I have asked my readers and fans before to give to a few organizations that do a world-class job of raising service dogs. One is in Minnesota, one in Maryland, and the last is ECAD in Connecticut. If you are moved to do so, you could give a tax-deductible contribution to one of them. It’s a beautiful thing.

Thank you for reading and for any support you give our veterans.