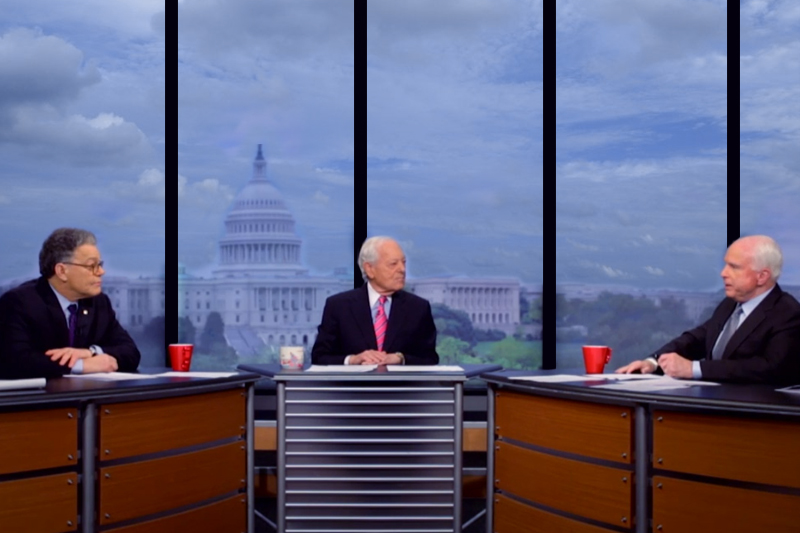 Pretty much everyone agrees that right after someone dies, it’s very bad form to say something bad about them. That’s why it’s admirable that Donald Trump waited a full seven months to say horrible things about John McCain.

First of all, and I know most Americans feel this way, it’s a disgrace that McCain allowed his plane to get shot down, broke both his arms and a leg ejecting from the plane, and then was beaten and bayonetted by North Vietnamese before being dragged to a POW camp, where he was starved and tortured for five-and-a-half years. As far as Trump is concerned, McCain sat out the war.

Yes, it seems heroic that after his father was named commander of U.S. forces in the Pacific, McCain refused his captors’ offer of early release. McCain claimed he refused because the early release of the admiral’s son would be a huge propaganda victory for Hanoi and demoralize his fellow American POWs. But how do we really know that? Other than that’s what all the other POWs who were there with him say, and also that there seems to be no other explanation?

Why in God’s name is Donald Trump so obsessed with John McCain that he feels the need to attack him even when he’s dead? I mean, other than that John McCain is kind of a perfect example of everything Trump is not?

I usually don’t like bullet points, but here goes.

I have never seen Donald Trump laugh. Have you? In fact, I think that would make a good children’s book. In the story, Ivanka would offer a prize to any American who could make her father, the president, laugh. The prize would be the most valuable Trump property the family owns! (The Trumps would double its value on paper, take a huge write-off, sticking the winner with an enormous tax bill.) Americans would line up outside the White House during executive time – comedians, mimes. magicians, storytellers, contortionists, acrobats, jugglers, impressionists – but no one could get the president to laugh. I even got an illustrator for the book. But I can’t think of an ending.

Humor was another great thing about John McCain. He loved to laugh. A few years ago, John and I were asked to tape an opening before a Vikings-Cardinals game for Thursday Night Football. They put us in a Face the Nation set with former host, Bob Schieffer, interviewing us. John was fine with the script, but I wasn’t and started rewriting. John saw me scribbling away and said, “Hey, do I get to see it?”

Schieffer gave us an astonished look. “Your families vacation together?!”

“That’s right,” John deadpanned to Bob, then turned to me slightly miffed, “You know it wouldn’t hurt for you to pick up a check every once in a while!”

John and I shared a somewhat dark sense of humor. After he was diagnosed with brain cancer, John continued to come back and forth between DC and Arizona. When I thought it might be his last time in DC, I went up to John and said, “Say, John, I thought I’d send you a ‘Bad News – Good News’ joke every week or so.”

He laughed and said he’d look forward to that.

A week or so later, Ron Johnson of Wisconsin speculated on a radio show that McCain had given his famous thumbs down on the Republican health care bill because he was confused from his brain cancer. I wrote John: “The bad news is that you have brain cancer. The good news is that Ron Johnson’s ass cancer has moved to his mouth.”*

Every once in a while, I’d switch things up and send John a ‘Good News – Bad News’ joke. His favorite was: “The good news is that your mother is 105 and sharp as a tack. The bad news is that you have brain cancer.”

Fortunately, John came back to DC one more time. When he saw me in the well on the Senate floor, he grinned and put his arm around me, announcing to the Senators around us, “This man earned every dollar he ever got. At Saturday Night Live!”

Maybe that’s why Trump also attacked Saturday Night Live this week. Maybe he has a point. Sure, the show has made fun of every president since Nixon. But the only one SNL actually treated with complete contempt has been Donald Trump.

* May 7, 1998 interview with Howard Stern, discussing the dangers of dating.

* When I posted this on Facebook, I gave into nervousness from my Kitchen Cabinet and put “butt cancer.” But “ass cancer” was in the joke I sent John.