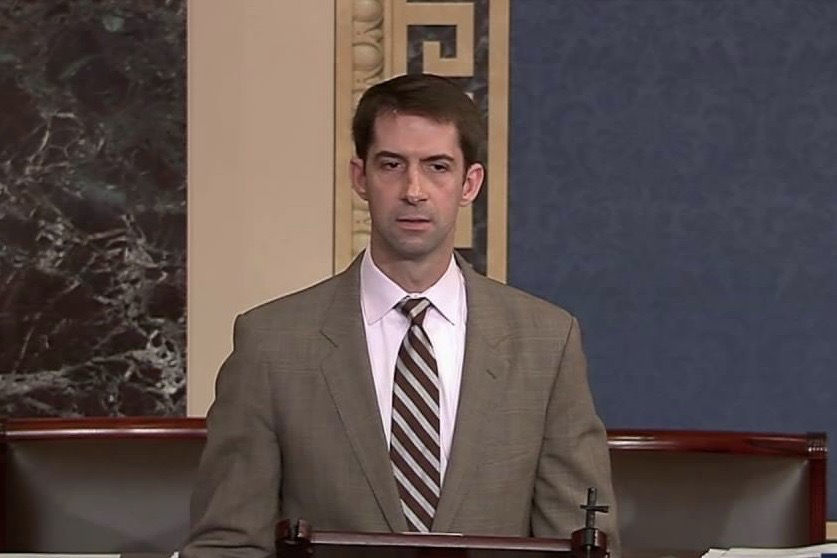 Only days ago, after asserting that “slavery was a necessary evil,” Tom Cotton was defending himself against charges of being anti-Semitic.  Now, the Arkansas senator has found himself embroiled in yet another controversy after telling The Arkansas Democrat-Gazette that “the Holocaust was also a necessary evil.” Appearing earlier today on the Fox News Channel’s morning show Fox and Friends, Cotton justified his remarks, arguing that “absent the Holocaust, Israel would not be a country today.”

Claiming that the editors of the newspaper had “taken my words out of context,” Cotton pointed out that “Israel is the only democracy in the Middle East” and that were it not for Hitler and the murder of six million Jews, “the Chosen People would be scattered all over the world.”

After co-host Steve Doocy pushed back, pointing out that, “thanks to George W. Bush, Iraq is also a democracy,” co-host Brian Kilmeade reminded viewers that Cotton had served in the infantry in both Iraq and Afghanistan, which, Kilmeade said, is, technically, a democracy as well.

“Thank you for your service,” said third co-host Ainsley Earhardt, adding that the Arkansas senator had graduated from Harvard Law School.

Cotton went on to explain that, according to the book of Revelations, “it is absolutely necessary for the Jews to be in Israel” so that “the Beast can be destroyed at the Second Coming of Christ.”

Earhardt commented that she had once heard that growing up in Spartanburg, South Carolina, and repeated that Cotton had graduated from Harvard Law School. After Doocy acknowledged that he had not himself studied the book of Revelations. Cotton went onto to describe how Jesus would appear in “the clouds of glory” during the battle of Armageddon “during the 70th week of Daniel.” Cotton did not specify exactly when that would be.

*In my first posting, I wrote that Ainsley Earhardt was from Spartanburg, North Carolina.  Spartanburg is in South Carolina. Also, because Tom Cotton is so crazy racist – (see here profoundly racist case against DC statehood) – a number of readers did not recognize that this piece is satirical. To set the record straight, Tom Cotton did tell the Arkansas Democrat-Gazette that “slavery was a necessary evil.” but he did not say that the Holocaust was a necessary evil. So far as I know.