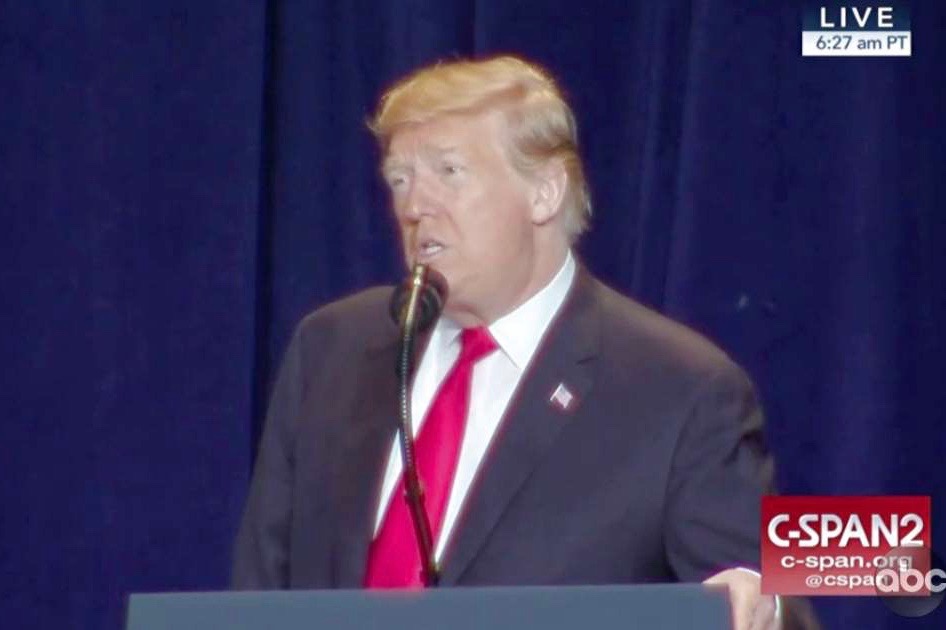 One of the most frustrating parts of being an American during these past couple years has been trying to process the sheer tonnage of lies, the endless vitriol and stupidity, the unyielding crassness, cynicism, and self-aggrandizement, not to mention the sheer cruelty coming on a daily basis from Donald Trump. It is so overwhelming that it all sort of blends into one nightmarish mountain range of bullshit.

At a certain point, the brain gives up. There is no sense trying to remember his childish taunts, malicious calumnies, and transparently empty boasts. Just wait a few minutes. There’ll be a new one.

Keeping track of, let alone cataloguing, his daily stream of effluent, quickly became an impossible exercise, especially, I would imagine, for the poor souls whose job it is to do just that. But every once in a while, I will find a new category of affront that screams, “point me out!”

And that is Trump’s unwillingness to step up during a moment of national pain and deliver a speech meant to provide some comfort to Americans in a manner that makes you believe he gives shit. Remember, this is a guy who criticized President Obama for using a teleprompter. Yet, when he spoke yesterday about the tragedies in El Paso and Dayton, his expressionless face appeared to be mounted on a swivel-head, turning mechanically from one prompter to another in a way that suggested that he was reading the words for the first time and that he really felt he had better things to do.

Mr. President, when more than thirty people are randomly gunned down by two men in two American cities within hours of each other, and one of the killers had written a manifesto borrowing heavily from your own words, it’s time to step up and at least say something that, while not particularly comforting, (not your forte), at least sounds sincere. Some tips. Practice the speech. Start by reading it. Several times. That way, when you say the words for the cameras, they will seem familiar to you and you may understand why you are saying what you’re saying. Try to rewrite the speech, if just slightly, in your own words – enough to make it sound like you mean what are saying. Don’t gin up emotion if you don’t have any to gin up. But at least make an attempt to pretend that you grieve for those who died and their friends and family.

Don’t go to El Paso. Or to Dayton. But especially El Paso. The families and friends of those who were massacred there have every right to believe that your words from the moment you started your campaign at Trump Tower, then throughout your campaign, and to the very day of the shooting – that those words encouraged the shooter and that their loved ones may very well be alive were it not for the hatred you’ve been spewing almost daily.

Give the speech – a new speech – that expresses heartfelt sadness and grief.  Do it from the Oval Office, not from one of your golf courses. And try to make it sound like you’re sincere, even if you’re not. That will require some work. But it will be worth it. Understand how desperate all of us are for some reassurance that there are indeed limits to your unfeeling cruelty. Please. Not just for the people of El Paso and Dayton. But for all Americans.