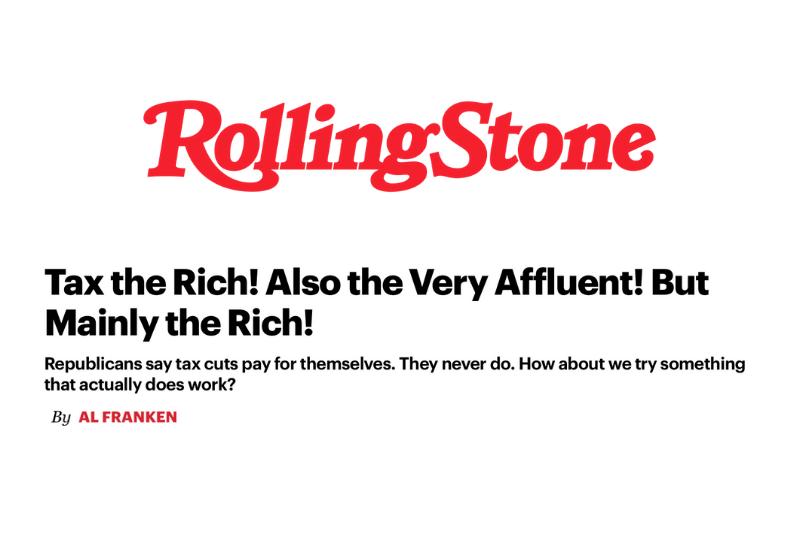 This piece was originally published in Rolling Stone on June 10, 2021

I really liked President Biden’s address to the joint session of Congress in April. It’s as if he was saying, “Let’s do all the stuff we know we should do but haven’t done.” It was a long list. That’s because there’s a lot of stuff we know we should do and haven’t done. Like infrastructure, child care, making sure every kid’s K-12 education has adequate resources, and addressing the climate crisis. It’ll cost a lot. But then again, it’s all stuff we really can’t afford not to do.

And there is a way to afford it all. Tax the rich. Perhaps you’ve noticed that the rich have been getting a lot richer for quite a few decades now. According to the Federal Reserve, which has no reason to lie about these things, the top one percent of Americans, by net worth, owned 51.8 percent of stocks. The top 10 percent owned 87.2 percent. And that’s from Q1 of 2020, just as the pandemic was hitting. Those numbers have grown substantially since then. According to a study by Americans for Tax Fairness and the Institute for Policy Studies released in April, the total wealth owned by America’s billionaires grew 55 percent over the preceding 13 months.

At the same time, more Americans than ever believe that their children aren’t going to do as well as them. As the rich get richer, our country seems to be falling apart. According to the World Economic Forum, the United States ranks 13th in the world in infrastructure. Full disclosure: The World Economic Forum is a Swiss NGO and may be biased toward Switzerland, which it ranks fourth. But move Switzerland down four or five spots and the United States is . . . still 13th.

What’s weird is that one of Donald Trump’s biggest calling cards during the 2016 campaign was that he is a builder. That’s arguable, or rather, arguably laughable, or rather, laughable. Still, he promised a trillion-dollar infrastructure package — which Americans loved just as much as his promise to turn Obamacare into “something terrific.” With Trump in the White House, it seemed that every week in Washington was “Infrastructure Week.” Republicans controlled both houses of Congress for Trump’s first two years, yet somehow we never had a “Mark Up An Infrastructure Bill And Pass It Week.”

President Biden’s proposal isn’t just a $2.3 trillion infrastructure package — it’s a $2.3 trillion jobs bill. And nearly 90 percent of the jobs, he said, would not require a college degree. Hmm. Has anyone noticed that working-class Americans really like to work? Especially in jobs that actually accomplish something? Like — get this — building new infrastructure. And infrastructure that helps the country become more resilient in the face of record-breaking wildfires and storm surges sounds pretty good to most American workers too.

Biden is eager for the infrastructure bill to be a bipartisan effort, however, and has been negotiating with Republicans to find a deal everyone can feel good about. But if the Obama years are any indication, Republicans will only feel good if a Democrat in the White House fails. So we shouldn’t hold our breath. Democrats can pass an infrastructure bill through the fast-track reconciliation process if they need to, which only requires a simple majority of 51 votes to pass, which still may prove difficult but is a lot more doable. Because Mitch McConnell naturally doesn’t like any of Biden’s big plans one bit.

Well, yeah, I guess. If you count tens of thousands of construction jobs retrofitting buildings to make them more energy-efficient, then, yeah. Or how about the jobs replacing lead pipes with pipes not made of lead? So our kids don’t get brain damage. And, yes, Biden would jack up your taxes — if “you” make more than $400,000 a year, which puts you in the top two percent of the country, by the way.

Then there’s child care. It’s something every other developed country provides. Here’s Mitch on child care: “[Democrats want them] using the kinds of child-care arrangements Democrats want them to pursue. . . . Instead of encouraging work and rewarding work and helping connect more Americans with opportunities to work and build their lives, this administration is working overtime to break the link between work and income.”

Huh? Overwhelmingly, the number-one reason Americans want reliable and affordable day care is so they can go to work! And know that their child is safe and well cared for. What Mitch was really saying is, “I am completely out of touch. It’s almost as if I haven’t talked to a normal person in three decades.”

So who does McConnell talk to? The wealthy. And, of course, the very wealthy. Not to mention the very, very wealthy. Many of them are brilliant, industrious folks who have worked hard and smart all their lives, building great businesses and providing employment for lots of hardworking Americans.

Mostly, however, these people were merely born and had the good fortune of being the child or descendant of one of those brilliant, hardworking types. Or of less brilliant, less hardworking white gentry who owned plantations and the people who did the backbreaking work on them, or scoundrels who took lands from Native Americans. All of that comes under the heading of Dynastic Wealth. I know some of these people. I’ve raised money from them. (There are actually very wealthy people who think they should be paying more in taxes.)

In fact, taxing the rich is a good idea according to everyone who understands that trickle-down economics has failed spectacularly for decades. Paying your fair share is common sense, and the American people know it. In a poll last year, 64 percent of Americans (and more than half of Republicans) strongly or somewhat agreed that “the very rich should contribute an extra share of their total wealth each year to support public programs.”

Yet Republicans keep insisting that the very rich contribute a smaller and smaller share of their exploding income. In 2017, Republicans weakened the estate tax, so that you would be exempt from paying taxes on an inheritance unless it exceeded $11.2 million; that threshold used to be $5.5 million. So only about 1,900 estates paid an estate tax in 2018.

From 1978 to 2018, CEO compensation grew 940 percent, according to the Economic Policy Institute. And yet, in 2017, Trump and the Republican Congress cut the corporate tax rate from 35 percent to 21 percent. Corporate execs promised to reinvest the savings, creating an economic boom. Instead, they used it to buy back stock and give themselves huge bonuses. Some companies, like FedEx and Nike, have paid no federal taxes at all in the past three years. So Biden has proposed raising the corporate rate to 28 percent. I think it should be 36 percent. I taught my kids that if they didn’t keep their promises, they’d be punished.

Biden is also seeking $80 billion in new funding for the IRS over the next 10 years. And those enforcement dollars will be aimed at — the rich and very affluent! ProPublica just published an investigation showing that billionaires like Elon Musk and Jeff Bezos have paid zero federal income tax in some years. Zero! Trump, who paid $750 in federal income taxes in 2017 and zero for many years prior, made huge reductions in IRS staffing. The IRS under Trump audited Americans with incomes under $25,000 at a higher rate than those with income up to $500,000. Audits of the wealthy were drastically reduced because the auditors capable of investigating the complicated tax-avoidance schemes of the rich were drummed out by Trump apparatchiks.

The Biden folks say that they’ll capture an additional $800 billion in revenue by beefing up the IRS. Over-optimistic? Probably. But let’s say it’s only $280 billion. Disappointing, sure. But it’s $280 billion!

It would help us do all that other stuff Biden talked about — free community and technical college, electric cars, more spending on R&D, funding for K-12 schools so that the quality of a kid’s education doesn’t depend on her community’s tax base, expanding on the Affordable Care Act to finally join every other developed country in making health care a right.

All in all, Biden hopes to raise $1.5 trillion over the next decade by cutting out tax loopholes and raising the top individual tax rate to 39.6 percent, where it was when George W. Bush took office. McConnell has called that a nonstarter: No infrastructure bill if there are any tax increases. Really? Do you really think America will go for that? No infrastructure if there’s any tax hike on people making more than $400K a year?

It’s hard to know what they could possibly be thinking. The GOP is barely a political party now. And what’s left of it is dedicated to nothing — nothing other than propping up the dumbest lie, the lie that somehow the election was stolen from a malevolent, vindictive narcissist who got 7 million fewer votes than the other guy.

The cult of Trump is what they are running on, rather than proposing any legislation that could actually do some good for people. And to win with that record, they will have to suppress a lot of votes, use a lot of dark money, and sling a lot of disinformation to regain power — and by all indications, that’s the plan. In the wake of the Democrats’ win in November, Republicans introduced 361 bills in state legislatures across the country that would make it harder for people to access the ballot box. Not subtle. And I suspect that voters are on to them.

Nihilism may work elsewhere. But this is America. And Americans want to lead the world again. And to create a better, stronger, and more confident nation.

The fact is that every bit of what President Biden proposed is in everyone’s best interest. It’s not just ridiculous that we’re 13th in the world in infrastructure. It’s dangerous. If a bridge collapses, a Mercedes drops as fast as a Hyundai.