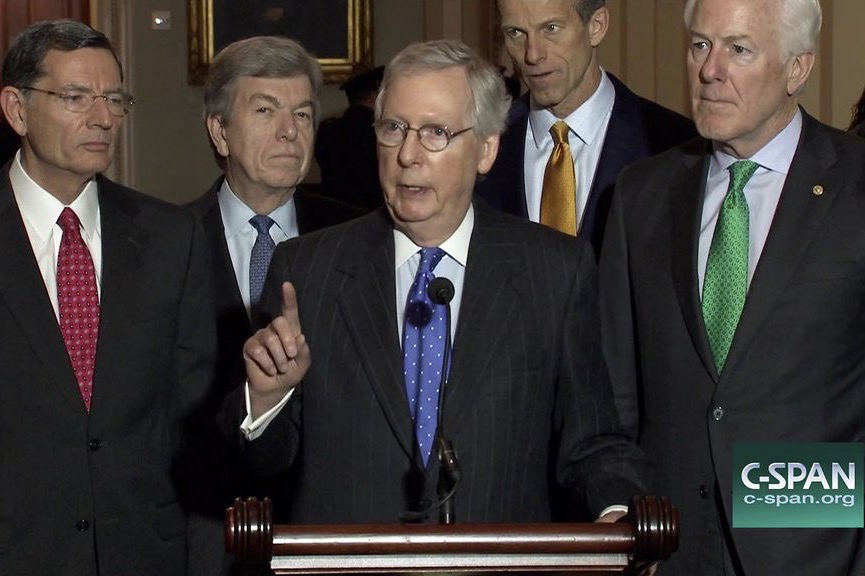 This past quarter the American economy fell at an annualized rate of 32.9%, the most precipitous drop in the 75-years that data have been recorded – the single biggest loss in any quarter in the history of the United States. In all, 22 million Americans lost their jobs because of the coronavirus – through no fault of their own.

This Friday provisions protecting those Americans from hunger and homelessness expired. Millions of our fellow Americans now live in abject fear of being evicted from their apartments or losing their homes. Millions face the terrifying anxiety of not knowing whether they will be able to feed their families or keep a roof over their heads. Or be able to afford the prescription drugs or other health care they or their children may desperately need.

Republican Senators knew on Friday that the benefits passed by Congress over four months ago in the CARES Act were set to expire that day. Not one of them need worry about providing food and shelter for their families. Many, like Republican Majority Leader Mitch McConnell, are millionaires many times over.

On May 15th the House passed the HEROES ACT, which would keep in place the safety net Americans need during this pandemic in part by extending the $600 a week enhanced unemployment benefit to those who have lost their jobs. But the Senate has failed to act in the intervening two-and-a-half months. And now one of the main stumbling blocks to a Senate bill is that Republicans want to reduce this enhanced unemployment benefit from $600 a week to $200 to the 17 million Americans who remain unemployed.

Their reasoning? Many workers, they claim, are staying on the sidelines because they are receiving more in jobless benefits than they were making when they were working. The problem is – studies show that that is just not true.

Americans want to work. Yes, many Americans do now receive more in unemployment benefits than they received in benefits when they were working. But guess what? 70% of those who have returned to work after being laid off in the wake of the coronavirus pandemic have done so even though they will lose income by going back to work.

As the lead author of a Yale University study said of the $600 enhanced benefit – “Basically we have no evidence in our sample of a change in employment that’s been attributable to this policy change.”

But unlike in many other developed countries, the pandemic became an out-of-control pandemic in the United States. And that is the fault of the president and his enablers in the Senate and governors’ mansions and of the non-mask wearing, non-social-distancers who took their cues from them. Because of them, over 150,000 Americans have died and our economy remains in the dumper.

And not only do economists agree that extending the $600 a week enhanced benefit will help give the economy a boost, there is no evidence that it has increased the number of unemployed in any meaningful way.

But what about the anecdotal evidence of workers who did not go back to work when they were offered their old jobs back? Well, first off, according to the Bipartisan Policy Center in Washington, DC, only 12% of unemployed Americans have said that their employer had asked them to return to work.

“Okay!!!” Republicans might say. “So, why didn’t those workers decide to go back to work?”

Again, let’s remember that we’re in a pandemic. Many of those who were laid off have children and have no reliable childcare. And in places like Florida, where the number of infections and deaths from the coronavirus has been spiking, maybe it’s not the best idea to reopen schools this month.  And probably, most of the parents who rely on the $600 a week don’t have the resources to pay for nannies (or fancy schmancy au pairs), like so many Senators with school-age children do.

But, even so, Republicans might argue – “But that can’t be everybody who didn’t return to work when their employers asked them back. So, what could possibly be their excuse?”

Let’s return to the fact that we are in a pandemic. There are safety issues. Say, for example, you have one or more comorbidities – maybe diabetes asthma, and/or heart disease.  Or maybe you live with someone who does. And let’s say you had been working in a meat-packing plant that got shut down because it had become a Covid-19 hotspot. When the plant reopened, would you go back, knowing that, if you got infected – like, say, a Senator Rand Paul or a Representative Louie Gohmert – you or your loved one could very well die?

Of course, that is exactly why Republicans are demanding blanket liability. To protect their corporate masters. Why force them to spend all that extra money making sure that their workforce doesn’t get sick? Afterall, according to Wisconsin Chief Justice Patience Roggensack, people who die working in meatpacking plants aren’t “regular folks.”

I’m not sure how many of the over 150,000 Americans who have died so far from Covid-19 would be considered regular folks by my former Republican colleagues in the Senate. Maybe to them people who are desperate to provide food or shelter for their families fall into the same category as the meatpackers in Brown County, Wisconsin.

I trust that most Americans don’t feel that way. I’m hoping that regular folks will let the White House and the Senate Majority Leader know that. Right now, with an email or a postcard. And in November with their vote.