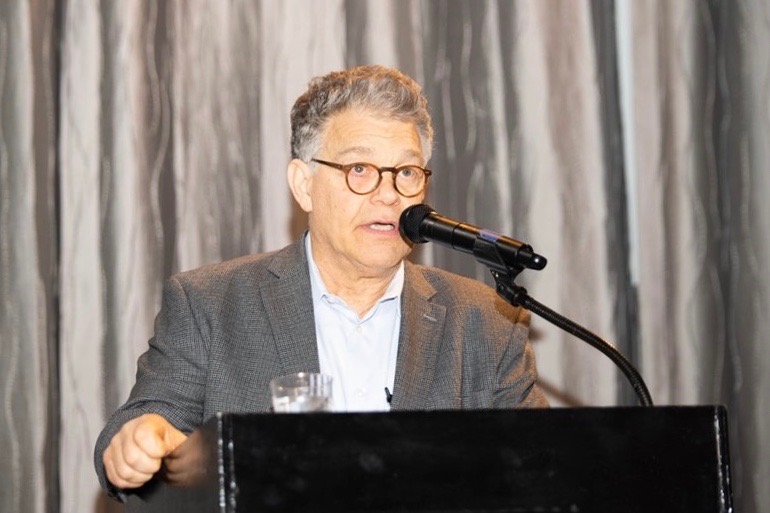 They have this attitude: “Oh, we’re Minneapolis Jews,” they’ll say.  “We’re responsible for Tom Friedman and the Coen Brothers, and Al Franken.”

And they say, “St. Louis Park is the Jewish suburb of Minneapolis, you schmegege.”

And I say, “I’m one of the three guys you just mentioned, you putzes.”

And they say, “It’s four, schlemiel. The Coen Brothers are two guys, you goniff!”

And I say, “Do you have any idea what ‘goniff’ even means?”

Then, I say, “Okay, what does goniff mean then?”

Then my friend Charlie stepped up to the podium and told me that JFS helps everybody in need.  In fact, non-Jews make up a majority of their clients.

Well, that was a shock. “But Jews first, right?” I asked, trying to process what Charlie had just said.

“No,” said Charlie, “We provide help for anyone who needs it, either by providing the services ourselves or by connecting them with the right people. Whether it’s housing, food, medical care, or mental health services.”

“Mental health services?” I thought. “They’ve been very helpful to me lately.” I was starting to get it!

“So, Jewish Family Services of St. Paul helps anyone who needs their help?” I asked Charlie. “In St. Paul and surrounding areas, except Minneapolis or the Minneapolis suburbs?”

Suddenly, it all made sense. That was the moment I realized that I should have read the background material they had sent me weeks ago; or paid attention to the inspiring video they showed at the beginning of the breakfast; or listened to the moving speeches by two Russian Jewish women emigres, Irina Margolin and Dora Lender, who had just been honored for decades of assisting newly arrived immigrants who spoke no English, just like them forty years ago.  That would have been very uplifting and reminded me of my obligation to all of those in need. If only I had paid attention!  Well, next time, I told myself.

Oh, the rest of the speech went even better! Eric Black, writer for MinnPost, called it “a tour de force.” But that’s not important. What’s important is that we raised a lot of money to help people, Jew and Gentile alike. And also that you know that someone called it a “tour de force.”