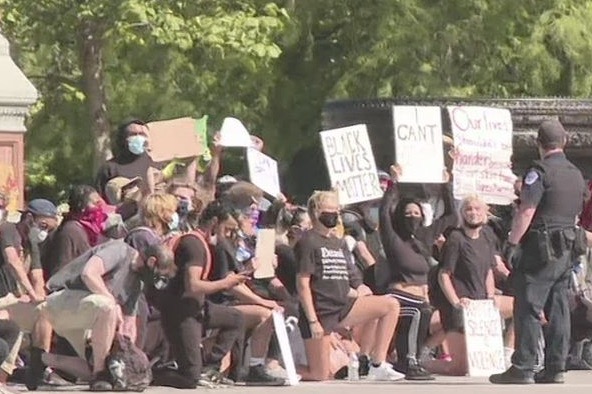 Late last week Washington Post columnist Eugene Robinson said that outrage at the murder of George Floyd “may be an inflection point.”

That’s when I thought to myself, “I hope he’s right. I hope this is an inflection point. But, inexplicably, it never is. It wasn’t after Michael Brown, or after Trayvon Martin, or Philando Castile, or Ahmaud Arbery.

Then a few things happened. Demonstrations across the country continued to increase in size and number, showing that an incredibly diverse and growing number of Americans are, yes, angry, but also deadly serious and not going away.

Then came the president’s insane photo op and the indictments of the three Minneapolis police officers who abetted Derek Chauvin’s murder of George Floyd. Americans began to feel that justice might actually be served this time. The demonstrations swelled yet again across the nation.

It’s beginning to look as if this might actually be an inflection point after all. But real, nationwide reform will be possible only if Democrats beat Donald Trump and his enablers in the Senate. If Democrats win both the White House and the Senate, Americans will expect them to comprehensively take on the brutalization of people of color that has been an unrelenting part our country’s history.

These are just some of the elements of reform that I would propose that Democrats take up in the first 100 days:

Earlier this week, Terrence Floyd wiped away tears as he spoke to a crowd gathered at the site of his brother’s murder.  Hate and destruction, he implored them, “won’t bring my brother back.”  The crowd roared. “Let’s do this another way,” he shouted.  “Let’s stop thinking that our voice don’t matter, and vote.” Another roar. “Educate yourself…Educate yourself and know who you’re voting for. And that’s how we’re going to hit them, because it’s a lot of us. It’s a lot of us.”

Donald Trump didn’t count on Terrence Floyd. He didn’t count on the millions of peaceful protesters, mostly young people – African American, Latino, Native American, Asian-American, and White Americans. They, like George Floyd’s brother, Terrence, have taken the lead. Let’s follow through – past November. And to a more just and joyful future.