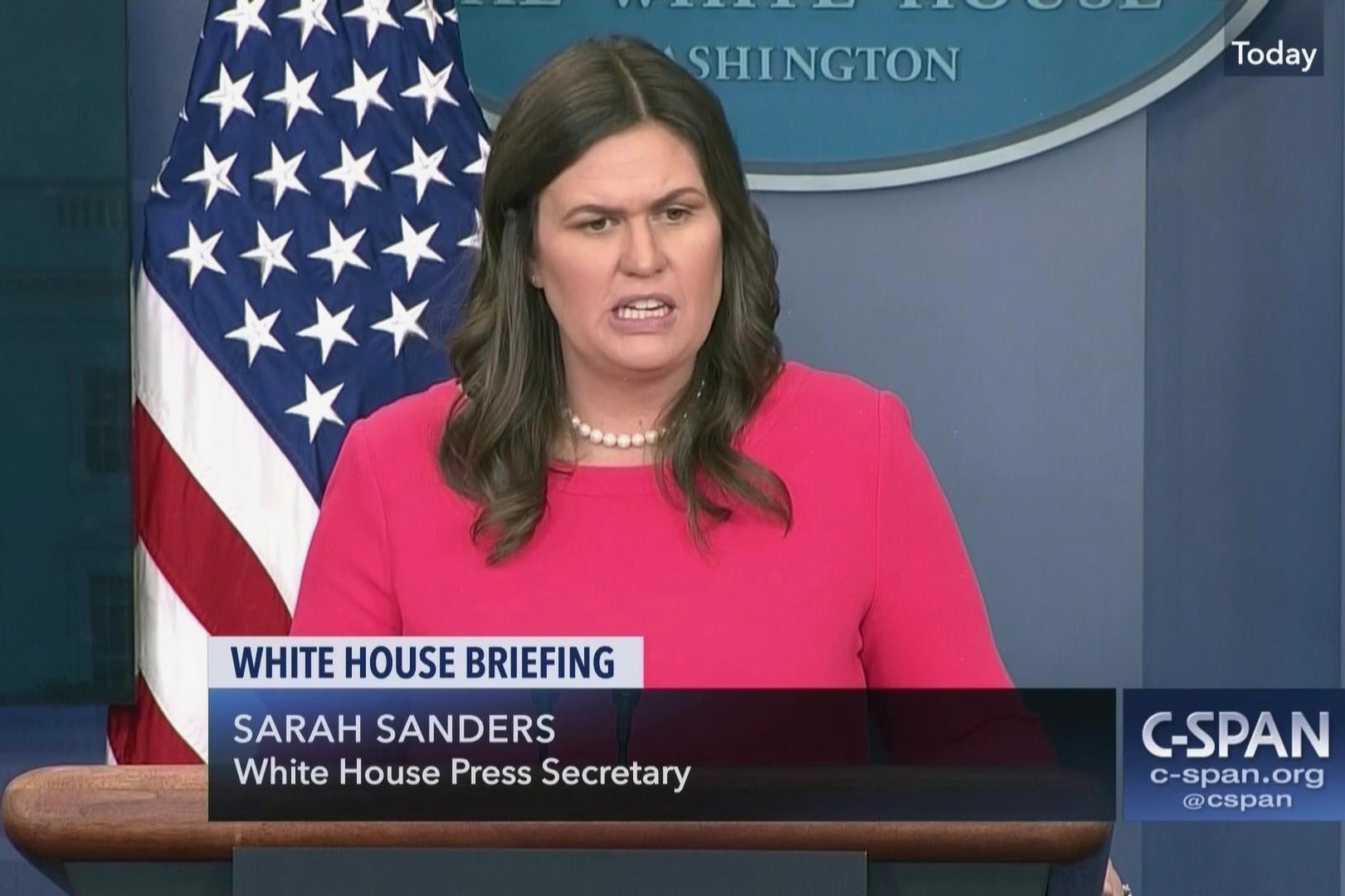 OPEN ON C-SPAN LOGO OVER CAPITOL:

ANNCR. V.O.:  Earlier today former White House press secretary Sarah Huckabee Sanders testified before the House Special Committee on Impeachment.  Ms. Sanders was questioned by Judiciary Chairman Jerry Nadler of New York about various statements she has made to the media that she later acknowledged were not true.

SARAH SANDERS IS IN THE WITNESS CHAIR AND IS EXTREMELY UNCOMFORTABLE.

MR. NADLER:  Ms. Sanders, thank you for responding to the court order that you appear.

MS. SANDERS: Well, it was a court order.

MR. NADLER: And had you not obeyed it, you could have gone to prison. Is that why you came today?

MR. NADLER: Ms. Sanders, the Mueller Report quotes you as acknowledging to the Special Counsel that you lied to the White House press corps about why the president fired FBI Director Comey. Is that correct?

MR. NADLER: You told the White House press corps that the reason the president fired Mr. Comey was that the rank and file of the FBI had lost confidence in Comey. Was that a true statement?

NADLER:  And what did you tell Mr. Mueller about why you had told the press corps that “the rank-and-file of the FBI had lost confidence in Comey?

SANDERS:  I told Mr. Mueller that I had said that, quote, “in the heat of the moment.”

NADLER:  And was that statement true? That you lied to the press corps in the heat of the moment?

NADLER:  Now, you told the Special Counsel something else about that untrue statement, didn’t you?

MS. SANDER: Yes. I admitted that saying that Comey had lost the support of rank-and-file members was, quote, “not founded in anything whatsoever.”

MR. NADLER: You also told the Special Counsel that when you told the White House press corps that you personally had been contacted by “countless members of the FBI,” that had been, quote, “a slip of the tongue.”

MS. SANDERS: Yes. A slip of the tongue.

MR. NADLER: And, in fact, you told my staff in a pre-interview that you had not been contacted by countless members of the FBI complaining about their lack of confidence in Director Comey.

MS. SANDERS:  Yes, that had been an outright lie.  And I admitted that to Special Counsel Mueller and to your staff.

MR. NADLER:  In fact, you admitted that you had been contacted by exactly zero members of the FBI.

NADLER: And you also told us that you felt compelled to tell the truth to the Special Counsel because your testimony to him was given under penalty of perjury?

MR. NADLER:  And that the reason you told the truth in that instance was that you were afraid of going to prison?

SANDERS:  Yes. Very much so.

MR. NADLER:  And you know the testimony you’re giving before this committee is also under penalty of perjury.

MR. NADLER:  And the reason you are telling us the truth right now also is that you are afraid of going to prison?

SANDERS:  Yes.  I am very, very afraid of going to prison.

MR. NADLER:  And yet, two days after the Mueller Report came out saying that you had admitted lying repeatedly to the media, you lied to the media again?

MR. NADLER:  You told Mr. Stephanopoulos that when you lied about the reason Director Comey was fired that, quote: “It was in the heat of the moment, meaning that it wasn’t a scripted talking point.  I’m sorry I wasn’t a robot like the Democratic Party.”  Am I quoting you accurately?

MR. NADLER: But what you told Mr. Stephanopoulos was not true, was it?

MR. NADLER:  And it was a lie because, in fact, it had been a talking point, hadn’t it?

MR. NADLER: And are you admitting that only because you are under oath here, and you knew if you lied, you could go to prison?

SANDERS CONSULTS WITH HER ATTORNEY

SANDERS:  Yes. That is correct.

NADLER: And why, after admitting in the Mueller Report that you had lied to the White House press corps, did you lie to Mr. Stephanopoulos?

SANDERS:  I misspoke because I was freaked out and didn’t know what I was saying.

NADLER: You were freaked out?

NADLER: Are you freaked out now, Ms. Sanders?

HER ATTORNEY LEANS IN AND WHISPERS IN HER EAR. SHE WHISPERS BACK. THERE ARE A FEW BACK AND FORTHS.  NADLER WAITS IMPATIENTLY.

NADLER:  Ms. Sanders, you swore to tell the truth to this committee.

SANDERS:  Yes. And I have. To the best of my ability.  Really, Mr. Chairman. I am not good at this.  And that is the honest truth.

NADLER:  I believe you.  But you know that being freaked out is not a legal defense if you lie to the committee?

SANDERS: Yes.  And that is why I am just trying so very, very hard to be truthful.

NADLER: So you don’t go to prison?

NADLER: Well then just tell us the truth.

SANDERS:  Okay. The truth is I am especially scared of people who do not look like me.

NADLER: Oh, no, no, no. No. You don’t have to bare your soul. Just answer the questions truthfully.

SANDERS: Oh.  So, I probably shouldn’t have said that?

NADLER:  Well…what you said is very ugly and sad. But I know it was honest.

SANDERS:  Thank you.  I can’t tell you how much that means to me.

NADLER:  Right.  Let me ask you something.   You’re about to leave the White House, and I imagine you are looking for a job with some public relations firm or maybe setting up your own shop.  Do you intend to continue lying to the public and to the media wherever it is you land?

SANDERS CONSULTS WITH HER ATTORNEY.  THIS IS A LONG ONE. FINALLY…

SANDERS: Yes.  But only if there is no other way to help my clients.

NADLER: Okay.  Just know that if you lie again publicly that we reserve the right to call you back.

NADLER: But it would be great not to have to call you again.

SANDERS: Tell me about it.

NADLER:  You may be excused.

SANDERS:  Thank you.  Am I still under oath?

SANDERS: Great!  (TURNS UGLY) This whole hearing is a witch hunt!  The ones you should be investigating are the lefty SPIES in the FBI who bugged Trump Tower!

NADLER: Oh boy. We will stand adjourned until tomorrow morning.

HE HITS THE GAVEL.  AS A FOX NEWS CAMERAMAN STEPS IN WITH HIS HANDHELD CAMERA POINTED AT SARAH…

SANDERS:  You ought to be ashamed of yourself, Mr. Chairman! To insinuate that I had been lying when this president is presiding over the strongest economy in the history of humankind!

SHE ADDRESSES THE FOX CAMERAMAN

SANDERS (CONT’D): You got that?

AS HE GIVES HER THE THUMBS UP…