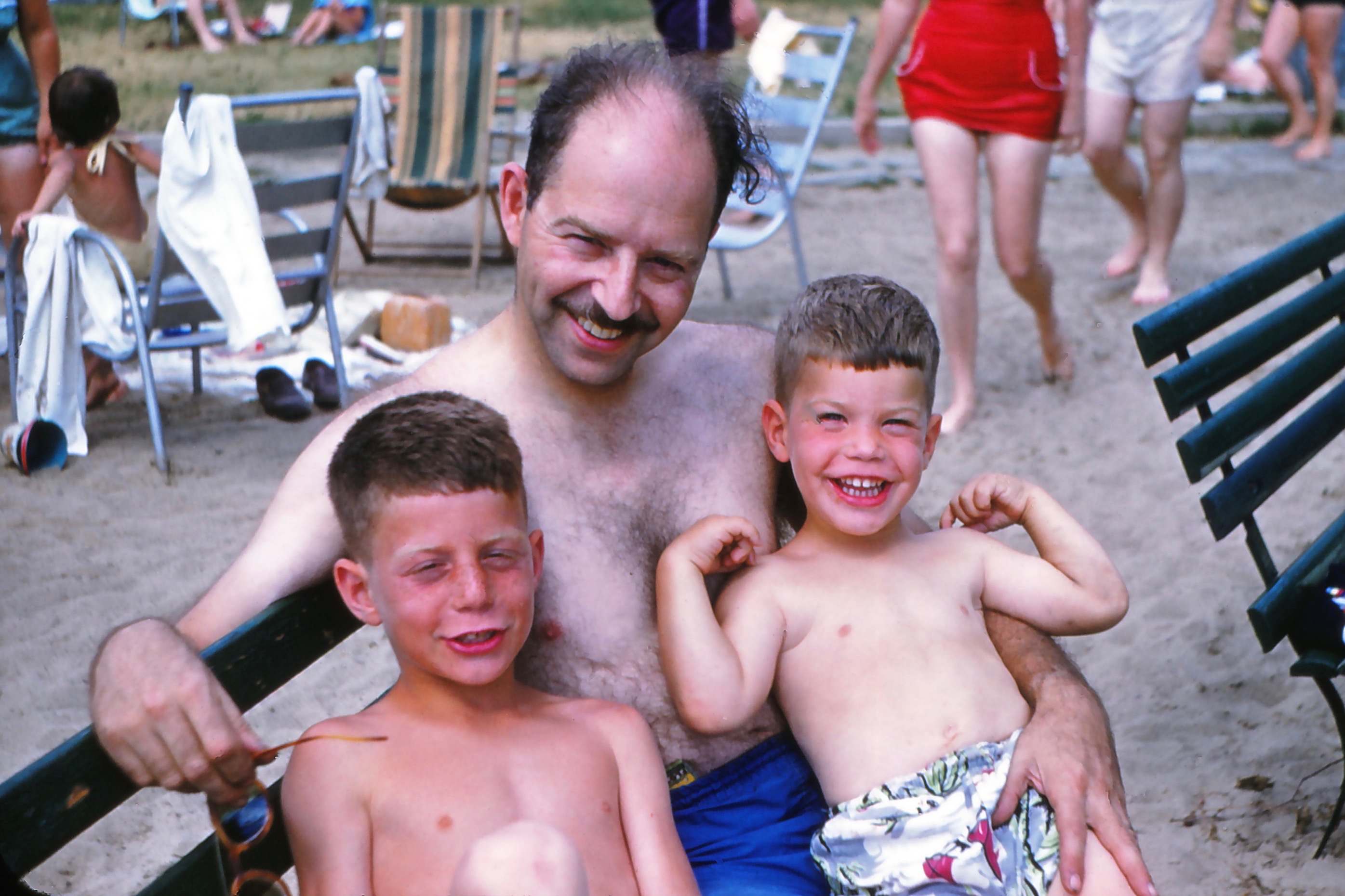 Happy Father’s Day, Dads! Of course, I like to think every day is Father’s Day! That’s because, even though over 70% of women with children under 18 work outside the home, they still do most of the work inside the home, including parenting. We dads mainly get the better of the deal. Playing golf with our buddies. Watching twelve hours of football every weekend.  And we get to be heroes if we do the slightest little thing like coach Little League.

That was not my dad, Joe Franken. To my dad, my brother, Owen, and I were the most important part of his life. That might be because he lost his father, Otto, when he was sixteen. Dad dropped out of school and went to work, and, by the way it’s too-often measured, was not a big success in life.

My dad never had a career as such. When I was four-years-old, Mom and Dad moved us from Paterson, New Jersey, to Albert Lea, a small city in southern Minnesota, to open a quilting factory. Like Otto, my other grandfather, Simon, was an immigrant, and Simon had built a quilting factory in New York. This is quilting – not quilts.  Quilting is a quilted fabric used in a number as garments. For example, for the lining of winter coats. At least in 1955.

The Albert Lea factory failed after two years and we moved up to St. Louis Park, a suburb of Minneapolis. When I was twelve or thirteen, I asked my dad, “Why Albert Lea?”

Dad said, “Your grandfather wanted to open a factory in the Midwest, and the railroad went through Albert Lea.”

“So, why did the factory fail?”

“The railroad went through Albert Lea. But it wouldn’t stop.” That was sadly true. But Dad put it that way because he was funny.

Here’s another thing about Dad. He inhaled a pipe his entire adult life. Yes, inhaled it. So, if Dad got on a laughing jag, he would inevitably start coughing; and at some point, cough up phlegm. That’s why whenever Johnny would say, “Ladies and gentlemen, Mr. Buddy Hackett!” my mom would leave the room.

I didn’t mind the coughing at all. It meant that my brother and I and my dad were all having the best quantity and quality time imaginable.

We spent a lot of time in front of the TV. Watching the Twins and the Vikings and the Gophers. My parents would let us skip school for the World Series. They actually played World Series day games back then!

We watched the 5:30 evening news every weeknight while eating dinner on tray tables. These weren’t TV dinners. Both my parents were excellent cooks. Dad’s specialties were veal marsala, and linguini with clam sauce (made with canned clams – no littlenecks or cherrystones flown in fresh to Minneapolis in those days).

One evening in the early sixties, we were watching Walter Cronkite. They showed footage from a civil rights demonstration in the South gone wrong. Police were hitting demonstrators with clubs and spraying them with high pressure firehoses and siccing vicious police dogs on them.

Dad was a Republican. A liberal Republican. A Jacob Javits Republican. He grew up in New York City and considered the Democratic Tammany Hall machine corrupt.  Which it was. Dad was born in 1908. He never voted for a Democrat until 1964. (He voted against FDR four times!)

In 1964, Barry Goldwater voted against the Civil Rights Bill. So, when Goldwater became the nominee, Dad changed from a lifelong Republican to a Democrat. Part of the reason that Dad had been a Republican is that he wasn’t a big fan of Southern Democrats. Southerners had been voting Democratic since the Civil War because Republicans had been such a pain in the ass about slavery.

Lest there be any misunderstanding about what the Civil War was about – here is the key passage from “The Cornerstone Speech” given by Alexander Stephens, Vice President of the Confederacy in April, 1861, explaining just why exactly the South had decided to take up arms against the United States of America.

Its cornerstone rests upon the great truth, that the negro is not equal to the white man; that slavery – subordination to the superior race – is his natural and normal condition.  This, our new government, is the first, in the history of the world, based upon this great physical, philosophical, and moral truth.

That’s why “No Jew could be for this.” Because, even though Dad never graduated high school, he knew full well what “this” was.

1964, of course, was the great turning point in our nation’s post-WWII politics.  Before 1964, the Republican Party had its share of Northeast liberals. The Democratic Party had its share of conservatives from the South. To get anything done, bipartisanship was not just necessary, not just possible: it was routine. And stuff got done.

Since 1964, our parties have grown further and further apart. Our politics are now tribal. Long agreed upon political norms have been eroded or just plain vanished. When Mitch McConnell was asked a few weeks ago whether he would fill a vacancy next year if a justice retired or died, he didn’t just say, “yes.” He found it funny.

My dad hated shit like this. He was the loveliest guy, but when he saw something that was just plain wrong, he would get angry. He didn’t enjoy being angry. Not at all. He was above all, a very sweet man.

The pipe killed Dad. At 85, he was diagnosed with lung cancer that had metastasized to his liver. I have never smoked a cigarette. I am not a big fan of the tobacco industry.  But Dad would have told you that he enjoyed his pipe. And he was pretty amazing on the way out.

About a week before Dad died, we got a call from Rabbi Black. Could he come over and talk with my dad?

I thought about it for a few seconds and then said, “I’m sorry, Rabbi. But my dad hasn’t mentioned that he’s dying. He knows it. We know it. But if he doesn’t bring it up himself, I don’t want to make him talk about it.”

Rabbi Black said he understood. The next day, he called again. Could he come and comfort my mother? “Oh, God, yes!” I said. Mom was a mess.

The rabbi came over in the afternoon. I think he was in the living room with my brother and me and Mom for about a half hour. I could not tell you for sure. But at one point, he turned to me and said, “Would it be okay if I went in and spoke with your dad?”

I left the living room and walked down a short hallway to my parents’ room, where I had been spending a lot of time of late. He was down to about seventy pounds and extremely weak. I opened the door and spoke to my dad.

“Dad, Rabbi Black from Temple is here. And he was wondering if he could come in and talk with you.”

Dad summoned his energy to speak. “Well, I don’t really know him.” Rabbi Black was new at the synagogue and Dad really hadn’t spent any time with him.

I laughed really hard. Dad smiled. I had given him the best gift you can give in our house. I had laughed at his joke.

I told Rabbi Black that Dad wanted to see him, and I lead him back to the bedroom and left them alone. After about a half hour or so, the rabbi came back to the living room and said some comforting things, as I recall, and left.

Three years later, I was on tour with my Air America radio show in Albuquerque. Rabbi Black now had his own congregation there and had gotten in touch, so we met backstage before the show.

Over coffee, I said to Rabbi Black, “You know, I never asked you how that half hour with my dad went. What was that like?”

He smiled and said, “Oh, he just tried to make me feel as comfortable as possible.” That was Dad.