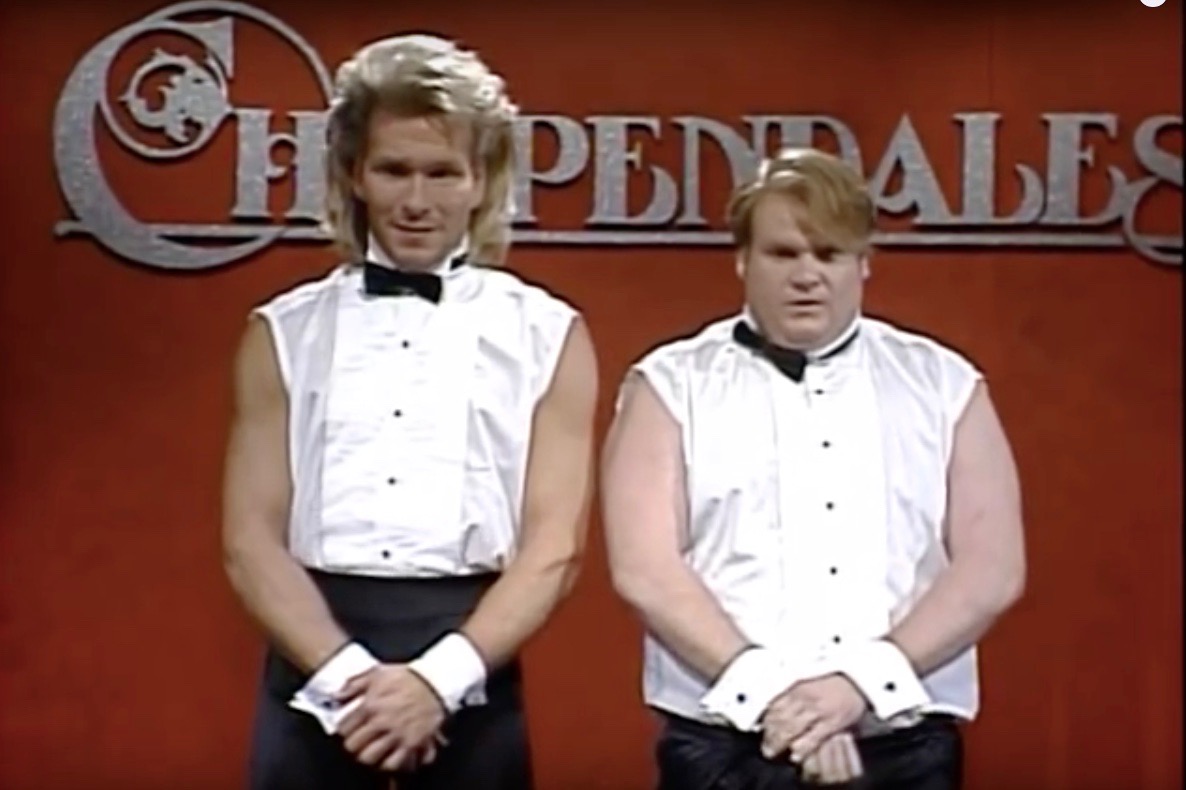 There is no such thing as THE funniest sketch in the 44-year history of Saturday Night Live. But if I absolutely had to pick one – it would be the Chippendale’s audition.

Open on the daytime exterior of a Chippendale’s nightclub.  Dissolve inside the club, where Kevin Nealon, a middle-management Chippendales exec, sits at an audition table, flanked by two subordinates, Jan Hooks and Mike Myers.  The three quickly lay out the premise.

“This is impossible,” Mike agonizes. “Can’t we just hire them both?”

“No. We’ve been through this,” Kevin reminds them.  “We’ve only got the budget for one dancer.”

“Yeah. But they’re both so good,” says a pained Jan. “I can’t decide between them.“

Mike protests one more time. “But these guys have been through hell! A five-hour audition. Three callbacks.”

Kevin chides Mike, “Look if you want to give up your salary so Chippendales can hire both these guys, that’s fine with me.”

“Ok, Ok,” Mike concedes. As Kevin instructs Victoria Jackson to bring in the two finalists from backstage, Mike shakes his head in frustration: “This is the part of the job that I hate!”

Angle on the Chippendale stage. Patrick Swayze as Adrian enters from the wings wearing a sexy Chippendale costume – white sleeveless tuxedo shirt, black tuxedo bowtie, and skintight black stretch pants, showing the lean, chiseled body Swayze had maintained from his days as a dancer and then star of movies like Dirty Dancing and Ghost. Chris Farley enters as Barney – his fat, flabby body only accentuated by the ridiculous costume.

Kevin apologizes for the long, arduous audition process they’ve been put through, explaining what a testament that is to just how good both of them are and how difficult their decision is. As Adrian and Barney listen nervously, we can see how badly both want it.  “I wish we could just flip a coin and be done with it,” Kevin tells them. “But we can’t. We’re Chippendales.”

Kevin gives the cue for the music, “Working for the Weekend” by Loverboy.  Jim Downey, who wrote the sketch, had given a lot of consideration into selecting the perfect piece of music.

What follows is an astonishing minute and forty seconds of amazingly energetic and hilarious dancing.  Farley was new to the show at that point, and in one astounding performance, endeared himself forever to everyone who was watching. With the commitment, energy, and comic instincts that Chris brought to everything he did. Chris matches Swayze’s perfectly executed moves with an athleticism, grace, and sheer stamina that no one could possibly have anticipated.

When the dance ended, the studio audience erupted in a huge ovation.  Kevin excuses Barney and Adrian so his team can make their decision.  We follow Barney and Adrian backstage where they excitedly congratulate each other on his performance.  While each has an enormous emotional investment in this dream job, both sincerely believe that the other guy will be chosen and vow that whatever happens, they will remain buddies.  Here Chris’s extraordinary sweetness shines through.  All of us at SNLloved Chris because he was a fan of everyone else’s work, always had a ready laugh, and genuinely rooted for every other actor, writer, and comedian.

Called back to the stage, Kevin tells Barney and Adrian that before he announces their decision, he wants to tell them once again how truly difficult it was for them to make their choice and to thank them for their patience during the long, arduous audition.  Then, a dramatic pause.  “We’re going to go with Adrian.”

Kevin goes on to tell them that the deciding factor was that Adrian’s body was so much sexier than Barney’s. At one point, Barney makes one last ditch effort to give a sexy smolder. “No, no, Barney,” Kevin says, slightly embarrassed for him. “Barney, we’ve made our decision.”

The sketch had come to its inevitable conclusion.  Every moment along the way had been carefully crafted and beautifully executed by everyone involved.  But, of course, it was all Farley. And Downey, who had the idea and realized it perfectly.

I don’t know why Chris had such powerful addictions to food and drugs. At SNL we knew that drugs kill people. Belushi had taught us that. Chris worshipped John and would ask me about him all the time. I once told Chris he could lose forty pounds and still be the fat guy, and he laughed pretty hard.

At the time, I had been doing Stuart Smalley, host of a cable access show called Daily Affirmations. Stuart was a member of several twelve-step programs and his show was heavily grounded in those principles. So, we’d talk sometimes, especially after he screwed up, about what he was struggling with. The thing people may not know is how hard Chris tried to get sober. I’d guess, all totaled, he’d gone to ten or so rehabs in a relatively short time period. For several months, Chris did the show while living in a half-way house run by Hazelden.

After Chris had returned to the show from yet another stint at rehab, I pitched him an idea for a sketch called “The Relapse Guy.” The sketch starts with the exit session at the rehab before a patient goes home. The counselor at the rehab, played by Tim Meadows, assures Chris’s family (Phil Hartman, Julia Sweeney, Mike Myers, and guest host Shannen Doherty) that this time Chris has finally gotten it, which they’ve all heard many times before. Tim tells them that the rehab has gotten Chris a job – as an organ courier.

CUT TO: the operating room, where the surgeon and his transplant team are waiting impatiently for the liver, which is hours late. Enter Chris, drunk out of his mind. He opens the cooler, pulling out a prepackaged calf’s liver from a supermarket meat case, and hands it to the doctor just as he passes out, collapsing on the patient on the operating table. Chris loved it. Every few weeks he’d ask me, “How about another ‘Relapse Guy’?”

What was so tragic to all of us who knew Chris is that he was a man with a huge heart.  In early 1994, a friend of mine told me that his friend’s son was hospitalized at Sloan Kettering with leukemia. The boy, Matt, was a big SNLfan, and my friend asked if I would go over and see him. Of course.

It was a rough visit. Matt was having a bad day. The kind of day where stories about Saturday Night Live were not going to do the trick. Matt was the same age as my daughter, and I felt so inadequate. A nurse came in and gave Matt some pain medicine that made him drowsy.  Before Matt drifted off, I quickly asked him who on the show was his favorite. Farley. Of course.

Chris came with me the next day.  Matt was feeling better and, man, did he light up when he saw Chris.  Farley quickly learned that Matt was taking medical marijuana in pill form. It wasn’t long before Chris started trying to steal Matt’s pills and going nuts when the nurse wouldn’t let him have any.  Matt was laughing so hard, and his mom and dad were grinning. Matt’s parents are very devout Christians (of the social justice, feed the hungry variety) and when Chris started using some foul language, I saw mom’s smile quickly fade. I took the dad aside and apologized for the language and he very pointedly said, “I don’t care. I fucking hate this fucking disease!”

After about thirty minutes, Matt’s parents brought something else up. They were fortunate. They could take the time from work and could afford to have at least one of them there with Matt all his waking hours. But there were lots of kids on the pediatric ward whose parents couldn’t be there. Would Chris mind visiting some of them? Chris immediately went room to room with the same energy he gave to the Chippendales sketch. He didn’t stop until we had made sure that he’d visited every child and made them laugh. Then we said goodbye to Matt and his parents and headed to the elevators, where Chris broke down and cried.

Chris and I returned to Sloan Kettering a number of times to visit Matt and the other kids.  Matt’s leukemia went into remission, and he was able to move back with his parents to Washington, DC. When I was down in DC, I visited, and Matt had – understandably -developed a sardonic sense of humor. The leukemia came back and Matt died in July of 1996. I went to the service for him, where pictures of Matt and Chris were prominently displayed.