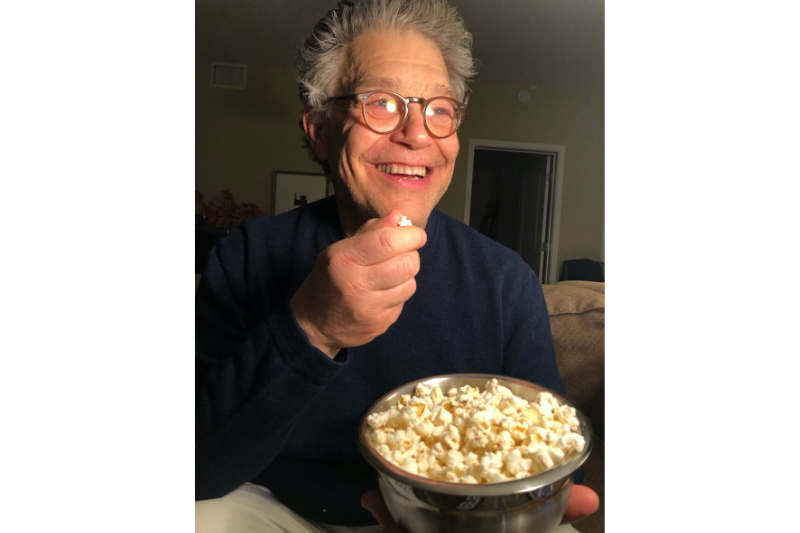 These are movies that have meant a lot to me over my life. Or that I just really love.

Dr. Strangelove – I grew up thinking there was a pretty good chance I’d die in a nuclear inferno. Strangelove came out in January, 1964, when I was twelve, just fourteen months after the Cuban missile crisis. This is the movie that made me realize what satire is and how powerful and friggin’ funny it could be and inspired me to write and perform satire. Peter Sellers gives three tour d’ force performances and became my hero. It’s on Amazon and Apple.

Inglorious Basterds – I was born in 1951 and had the Holocaust pounded into my head. That was post-WWII America, when almost everyone in America was anti-Nazi. And unlike today, if you were pro-Nazi in post-WWII America, you just kept that to yourself. This is my favorite Tarantino movie, and the perfect dark revenge fantasy for every Jew and every other red-blooded Nazi-hating American. It’s on Netflix and Amazon and Apple.

The Graduate – Another defining movie in my life. (And Dustin Hoffman’s). I was sixteen, and it basically framed the 60’s for me and expanded my appreciation of the power of satire as social commentary. I want to do that! My friend Buck Henry wrote the screenplay with someone else. Coocoocachoo, Mrs. Robinson! It’s on Amazon and Apple.

Galaxy Quest – A perfectly executed comedy. The premise: The washed-up cast (Tim Allen, Alan Rickman, Sigourney Weaver) of Galaxy Quest, a TV series cancelled years ago, suffer through a Galaxy Quest convention, where a group of aliens enlist them for what the actors think is a paid gig.  They learn too late that the aliens believe the TV show was real. The cast ends up in another galaxy battling the aliens’ powerful and merciless enemies. After 9/11, I watched TV news for two weeks straight and finally turned to HBO, and enjoyed the hell out of this hilarious, sweet film. It’s on Amazon and Apple.

Apocalypse Now – Dan Quayle’s father didn’t want him to go to Vietnam. So, he got Dan into the Nat’l Guard. My Dad didn’t want me or my brother to go to Vietnam, so he protested the war. This was the first big Vietnam movie, and it’s epic in every way. Martin Sheen hosted SNL soon after its release and Jim Downey, Tom Davis, and I wrote the parody – Sheen is a Hollywood film executive sent to Southeast Asia to extract Francis Ford Coppola, who has gone nuts. “The horror!” It’s on Amazon and Apple.

Pulp Fiction – Travolta hosted SNL the week this came out and treated the cast and writers to a Monday afternoon screening. I wasn’t familiar with Tarantino at the time and brought my then-14-year-old daughter, Thomasin, who had the day off school, to the screening. About five minutes into the movie, everyone, including and especially me, started feeling a little funny about my bringing her.  There’s the scene where Uma Thurman has OD’d and Travolta stabs her with the hypodermic. When Thurman jumped up, Thomasin screamed with laughter, and everyone thought, “OK, it’s cool.” It’s on Amazon, Netflix and Apple.

Rudy – If you don’t like Rudy, there’s something wrong with you. Ditto for Hoosiers and Remember the Titans. It’s on Amazon and Netflix and Apple.

Bridesmaids – I’ve added this because I just watched it twice-through on HBO and it’s funny and sweet and edgy all at the same time. But mostly hilarious. Kristen Wiig arrived at SNL way after I had left, but, of course, I always follow the show. There was a point when the players included Wiig, Amy Poehler, Maya Rudolf, and Tina Fey (with a spectacular group of male cast members). After the other three women left, it became immediately evident how much Lorne and the writers relied on Wiig to carry the show. Not long after leaving SNL herself, Wiig co-wrote and starred in this thoroughly entertaining and impressive achievement. It’s on Amazon and Apple.

Fargo – The Coen Brothers and I grew up at the same time in St. Louis Park, a suburb of Minneapolis. In 1963, a guy from St. Paul named T. Eugene Thompson hired a guy who hired a guy who killed Thompson’s wife, Carol, in a horribly botched and bloody assault. The whole thing seemed very un-Minnesotan. The Coens deny it, but cinema’s most Minnesotan murder-comedy was clearly inspired by T. Eugene Thompson. And if you want to know what’s great about our home state, I have two words: Marge Gunderson. It’s on Amazon and Apple.

Saving Private Ryan – If Private Ryan is on, I watch it. As senator, I used to welcome “honor flights,” – veterans of WWII, Korea, and Vietnam who had flown to DC to visit the monuments commemorating their service. There are fewer WWII vets these days, but when they’d come off the plane, I’d say: “On behalf of the Mediocre Generation, I’d like to thank the Greatest Generation for saving the world.” They’d smile, but invariably would be modest about what they had done for all of us. I find the opening depiction of D-Day so haunting. I couldn’t help but think of that when Trump abandoned the Kurds in Syria – 11,000 of whom had died fighting on our behalf against ISIS – and excused it by saying the Kurds hadn’t been at Normandy. He’s right. They Kurds weren’t at D-Day. You know who was at Normandy? Our NATO ally, Germany. They showed up bigtime. Without the Germans there would be no D-Day. it’s on Amazon and Apple.

Big Business – (Laurel and Hardy – 1929) – You can rent this 18-minute silent movie gem on Amazon for 99 cents. It takes its time in the set-up – Stan and Ollie are selling Christmas door-to-door in southern California – but it leads up to a confrontation with Jimmy Finlayson that, in my humble opinion, is the funniest ten minutes on celluloid.  Finlayson, one of the great comic foils, had two trademarks. (1) The double-take with a one-eyed fadeaway. (2) An exasperated Dohhhhh!” which was the inspiration behind Homer Simpson’s “D’oh!” If you like, you can skip the first four-plus minutes before Stan and Ollie show up at Finlayson’s door. The next twelve minutes are not just classic physical comedy, but, as I came to realize, a PERFECT DEPICTION OF WHAT CONGRESS HAS BECOME. It’s on Amazon.

The Wizard of Oz – Message to my son and daughter – Do not let any of our grandchildren see this movie for the first time without my being there! It’s on Amazon and Apple.

There’s a lot more where these come from, but the list is already too long. Stay safe, everybody!