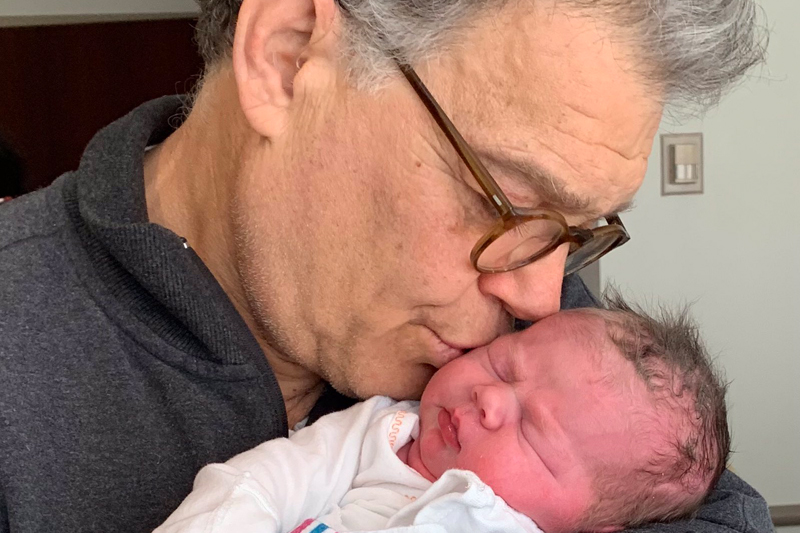 Franni and I were blessed yesterday with our fourth grandchild, Claire Frances Franken. Claire is named for my grandmother, Clara Franken, and for Franni and for Franni’s mom Frances Bryson.

Clara Oppenheimer was a German immigrant who came to this country in the 1880’s. She married Otto Franken who died of tuberculosis in 1924, leaving Clara widowed with two boys.

Fran Doyle married Donald Bryson in Portland, Maine in 1943. After Donald came home from the war, he and Fran wasted little time starting a family. One night in 1953, on his way home from a shift at the paper mill, Donald was killed in a car accident. Fran was widowed at the age of 29 with five young children.

Both Clara and Fran persevered with extraordinary courage, grace, and grit. Clara raised her boys and remained in the same small Washington Heights apartment in upper Manhattan until she died at the age of 82. Every summer, when our family would drive east from Minnesota to visit her, Grandma would bake the world’s most delicious apple pie for me and my brother, and then have us take turns laying across her lap and tickle our backs.

The rest of the year, our phone would ring every Sunday morning exactly at 9AM. My dad would answer, “Liebschen!” He and Grandma would talk for exactly three minutes, when the operator, at Clara’s request, would interrupt to say that their time was up. Grandma was frugal.

Fran was frugal too. She had to be. She worked in the produce department of a supermarket until her youngest started high school. She used a three-hundred-dollar GI loan to pay for a year of college. After four years, she became an elementary school teacher and all her loans were forgiven because she taught Title One kids. Fran, by the way, is still kicking in Portland, Maine, at age 95.

So, when my son, Joe, told us Claire’s name, I cried. It was such a generous gift to me and his mother. And it made us love our daughter-in-law all the more. Not only had she given us an 8 pound, 12 ounce healthy baby girl, but it let us know how much she loved our son and understood the importance of this family legacy.