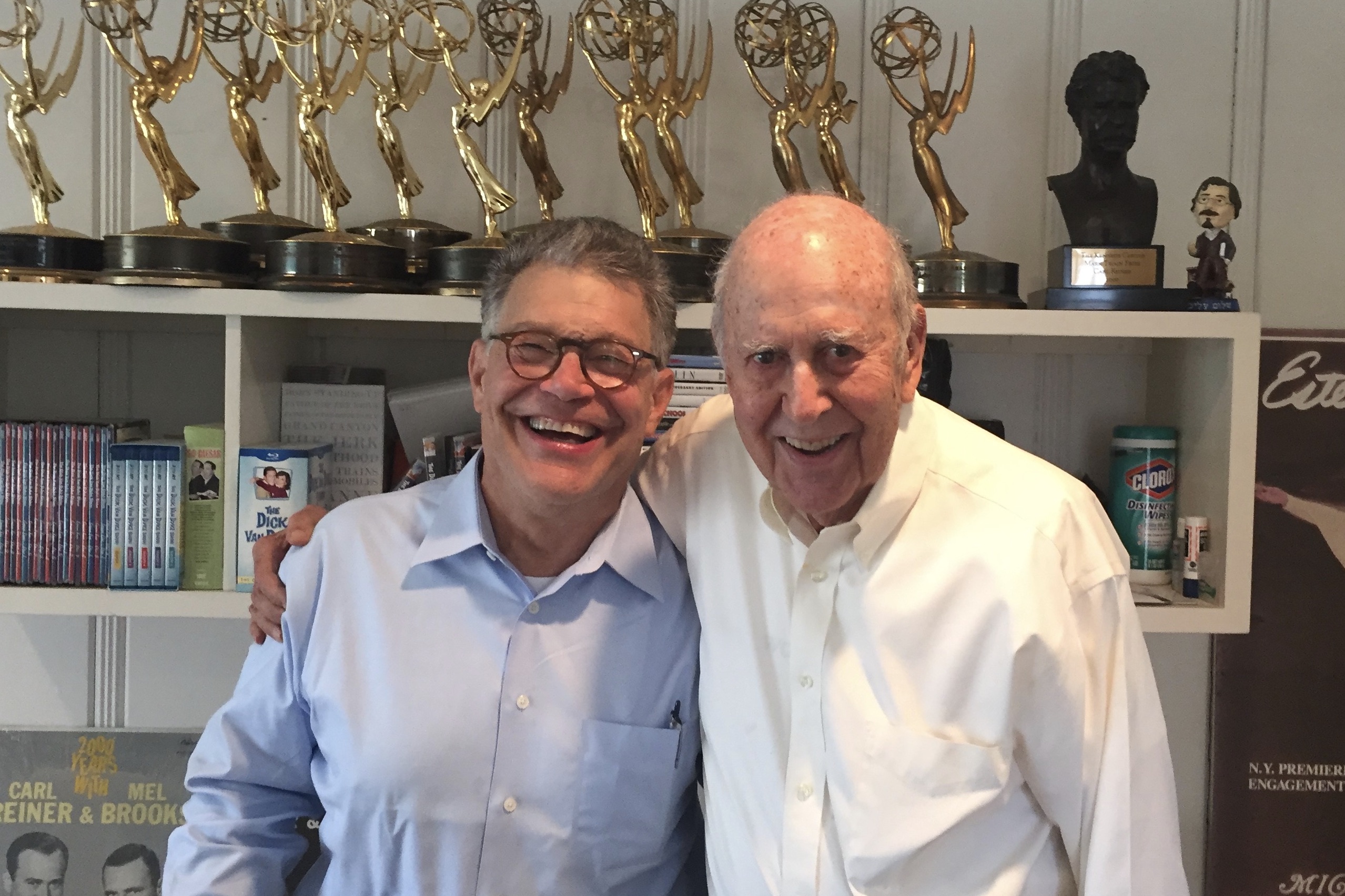 I’m less sad than moved today. From everything I know, Carl Reiner lived an exemplary life, loved by pretty much everyone who knew him, and was an indisputable giant of comedy who leaves behind an astounding body of work.

I first met Carl decades ago when he was spending a lot of time with Steve Martin. Carl, had just directed Steve in The Jerk, giving the hit movie its shape and heart. Steve and Carl had come to see Franken and Davis at the Improv in Hollywood. Tom Davis and I had been a comedy team since high school, and after a five-year stint at SNL, we had booked the Improv to showcase our act for people in Hollywood.

Steve and Carl stuck around after the show, and Carl was very generous with his feedback. It’s hard to express how much that meant to both of us both, but to me especially. I became a comedy writer in no small part because of The Dick Van Dyke Show, which Carl created. Van Dyke played Rob Petrie, a writer for The Alan Brady Show, a fictitious comedy-variety show starring an insecure, volatile egomaniac played by Carl Reiner. The stars of the show were Van Dyke, of course, and Mary Tyler Moore.

The important piece of this is that I loved the show and so did my dad. And by that, I mean we laughed a lot. That’s really why I went into comedy. I loved laughing with my dad.

The Dick Van Dyke Show introduced me to the idea that comedy is written. By comedy writers. When I first started running for the Senate back in 2007, I met with majority leader Harry Reid. Harry wanted to know what I did for a living. He, like many folks, was not aware that the lines that actors and comedians speak are written. Carl Reiner began his career as a writer and was a part of the legendary writing staff for The Sid Caesar Show, which included Carl’s best friend, Mel Brooks.

After the evening at the Improv, I didn’t really see much of Carl until years later when I started running for office. Carl was always very supportive, and, until he got into his 90s, he would show up at fundraisers when I came to LA. But after he stopped making it to the events, Carl and I kept in touch on the phone. He was always very passionate, knowledgeable and up-to-date about politics and public policy.

About six or seven years ago, I found myself in LA with a little time on my hands, and Carl invited me over to his house in the Beverly Hills flats. He took me upstairs to his office where he had been working that day on one of the many books he turned out over the last several years. One of my bookshelves is home to Carl Reiner books. The one I cherish the most is the one about the making of The Dick Van Dyke Show.

Four years ago, Carl invited me to dinner at his house with him and his Mel Brooks. I’m hesitant to put that in here, because it’s not even a humble brag. It’s a flat-out brag! Carl’s housekeeper made us hot dogs, boiled potatoes, and some kind of green vegetable that I don’t recall.  I will, however, never forget every other detail of that dinner. Among the things I learned is that when Sid Caesar did one of his foreign characters in pidgin German, French, Japanese, Russian, etc., he always slipped in a Yiddish word.

I was privileged to get to know Carl just a little bit. He lived a helluva great life. Franni and I send out condolences to our friend, Rob, and to all the Reiners.