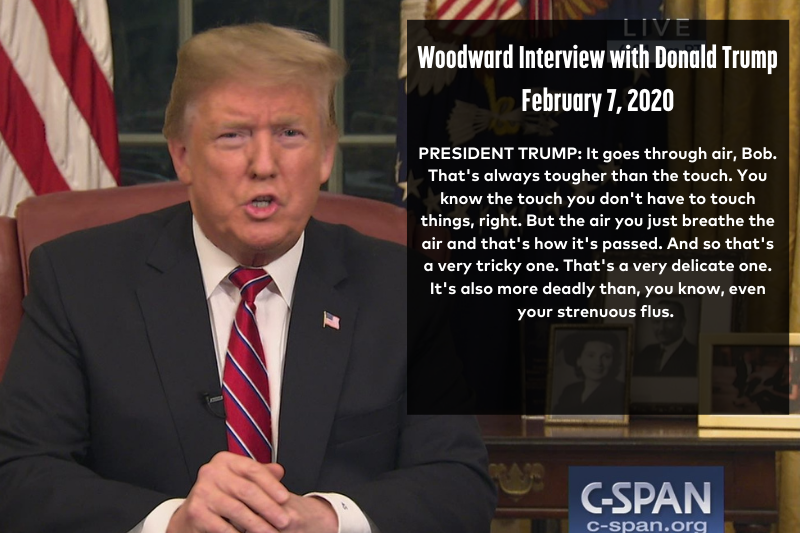 Now caught on tape telling Bob Woodward that he knew how deadly serious the Coronavirus was all along, President Trump is telling the American people that he misled us for our own good.  You know, so that we wouldn’t panic.

We can only imagine what would have happened had we, the American people, panicked. You think the toilet paper shortage was bad in March?! Oh my God!!!

Fortunately, for all of us, Trump played it all perfectly!  Yesterday, he reminded us once again, that because of his actions “we saved millions of U.S. lives.” Millions!

I just hope Americans can fully appreciate what that means. First of all – millions. Plural! That could be anywhere from two million at a bare minimum all the way up to each-and-every 331 million of us. What a disaster that would be!

But let’s be optimistic about this.  Only two million more dead Americans.  Y’know, if Trump hadn’t taken the actions he has taken.

Now, I am not exactly sure what the President counts as the actions he took.  I suppose he could mean anything he did. Maybe he means those “millions of U.S lives” would have been lost if he had just done absolutely nothing. You know, just continue to have rallies and refused to talk about it to anyone except Bob Woodward.  I admit, I’m having trouble wrapping my head around what he’s saying here precisely.

The point is that Trump saved at least two million of us somehow. And we should all be grateful for that! Mr. President, the two-to-three-hundred-and-thirty-four-million remaining Americans thank you!