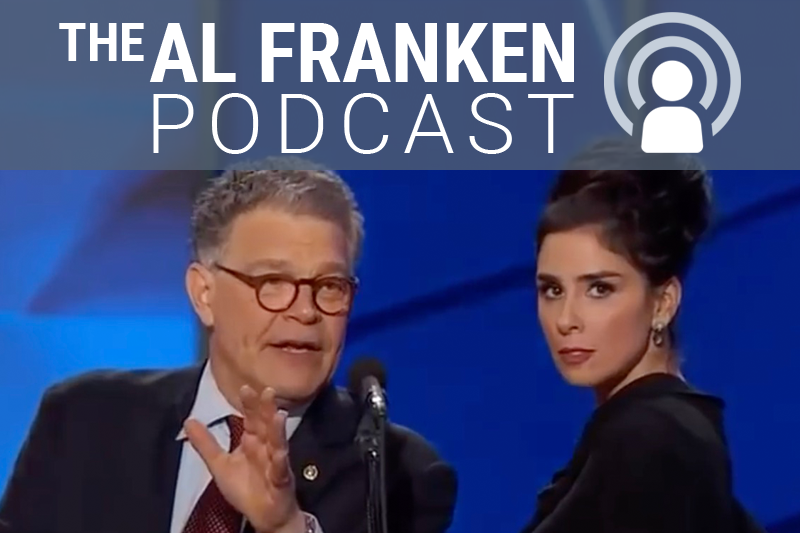 The brilliant, brave, and hilarious Sarah Silverman is this week’s guest on The Al Franken Podcast. I’ve watched Sarah evolve from a brash, spirited diamond-in-the-rough into one of our most daring, thoughtful, and beloved comedian/satirists.  In our, may I say, delightful, wide-ranging discussion, Sarah talks about her formative influences (her dad taught her to curse at two), the risk of taking risks (spoiler alert – it’s risky), and her embrace of change both in her craft and her life.

We talk about the presence of evil (hear a right-wing preacher call Sarah “a whore of Zion” and suggest that her violent murder would be God’s will), but also about the power of redemption (a converted Nazi skinhead tells Sarah to give compassion to someone who doesn’t deserve it). I point out that there are plenty of people who deserve compassion who don’t get it.

Turns out that Sarah is a huge star in Israel, but doesn’t believe in the God of Abraham, Isaac, and Jacob. Still, Sarah concedes, “I am very Jewey.”

Sarah and I discover an odd thing we have in common.  We’ve each had run-ins with the Westboro Baptist Church, a group that pickets the funerals of gay people while holding up signs saying, “God Hates Fags.”  Each of us asked them the exact same question: “Do you really think God hates?”

The reply I got came from a middle-aged man holding the sign: “Yes.  It’s one of his finest qualities.”

Sarah’s came from a seven-year-old girl: “Well, he hates YOU!”

We talk about comedians we admire, like the incredibly prolific Jim Gaffigan.  After Sarah notes that Trump has a gift for riffing for an hour and a half at his rallies, I offer my theory that the Border Wall was just Trump’s Hot Pockets. Trump closed down the federal government because early in his campaign, he trotted out the Wall at a rally, it scored, and from then on, he closed every show with “and Mexico’s going to pay for it!”

If you’ve listened to my first podcast with Maria Teresa Kumar about immigration and voter suppression and my second with Dahlia Lithwick and Matt Miller about impeachment, you might not have expected an interview with Sarah Silverman.  But I promise you.  It will all make sense.

Please give it a listen, won’t you?