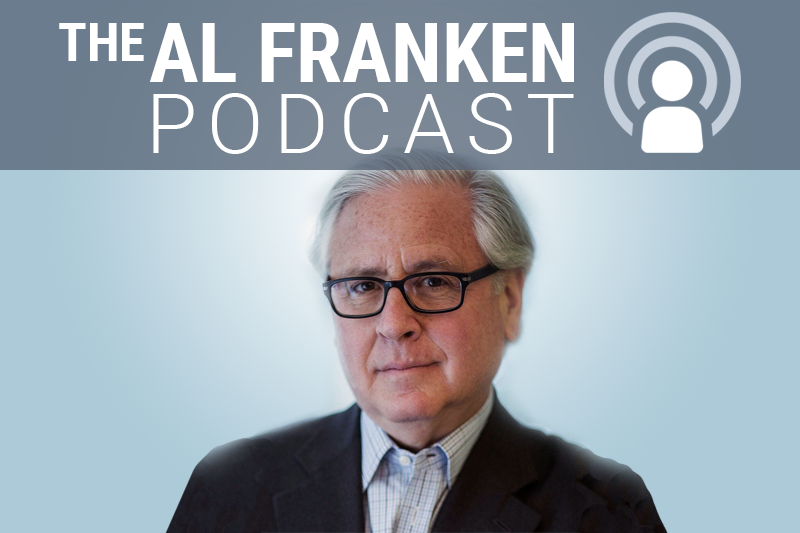 How awful do you think Mitch McConnell is? Well, he’s worse than that. This week on The Al Franken Podcast, Howard Fineman, winner of eleven journalism awards, (two of which were cufflinks*), tells us all about The Cynic. Fineman, who began his 46-year career at the Louisville Courier Journal, has been covering McConnell for decades and decades.

Fineman’s McConnell relishes being a big prick. When coal miners with black lung disease travel from Kentucky to ask Congress to restore the tiny tax on each ton of coal that funds their treatment, McConnell gives them all of thirty seconds. Hell – the miners aren’t going to vote for him; the coal companies have always supported him with tons of campaign funds; and these black lung miners came to D.C. just to embarrass him. Well, screw you, coal miners with black lung disease – you’re all going to die soon anyway.

Whenever Howard finds a reason to sympathize with Mitch – he had polio as a child – Howard uses it against him. After Trump wins and Republicans control all three branches, Mitch puts twelve white male senators in a room to craft the replacement for the ACA. They emerge with a plan that slashes funding for Medicaid, which pays for the health care of 37 million children, including 8.7 million with special needs.

It’s not all gloom and doom. There are funny moments too. I tell about the time I was presiding over the Senate during the debate over Elena Kagan’s confirmation to the Supreme Court. And Mitch gave the most condescending, sexist speech, typified by the following:

No one has any doubt that Ms. Kagan is bright and personable and easy to get along with. But the Supreme Court is not a social club.  If getting along in polite society were enough reason to put someone on the Supreme Court, then we wouldn’t need a confirmation process at all.

Imagine replacing “Ms. Kagan” with, say, “John Roberts” or “Neil Gorsuch.” And instead of “easy to get along with” try “easy on the eyes.” Unfortunately, that’s how I think. And I cracked up. The rest of Mitch’s speech was every bit as patronizing, and I got a bad case of “church laughter.”Well, as Howard explains, Mitch doesn’t mind being hated. He doesn’t mind being thought of as ruthless or cold-hearted or power-hungry. But the one thing he can’t abide is being laughed at.

Find out how that story played out and how Mitch McConnell is destroying our democracy bit by bit by tuning into The Al Franken Podcast.

*Bob and Ray Joke.  Their intrepid reporter Wally Balou was the winner of eleven diction awards, two of them cufflinks.